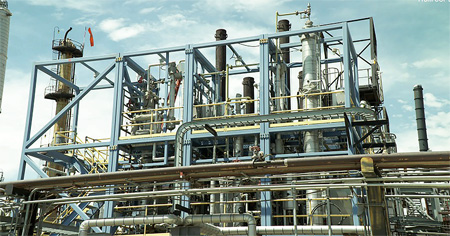 Utah legislators provided a carrot to local oil refineries to produce cleaner burning fuels with passage of SB197 during the recently completed session. Last week, Chevron announced that it was biting.

In an announcement from Mitra Kashanchi, manager of Chevron’s Salt Lake City refinery operations, the company said it will reconfigure the facility to produce low-sulfur, Tier 3 fuel by the end of 2019. Tier 3 fuels are made to reduce tailpipe emissions from automobiles. Gov. Gary Herbert called the announcement a “red letter day” for Utah air quality.

Federal Tier 3 standards were passed into law in 2014 and not only prescribe standards for fuels, but also for automobiles. The Utah Clean Air Partnership (UCAIR) says that Tier 3 cars will start showing up on Utah roads as early as this year.

Chevron refines 53,000 barrels of crude oil daily into gasoline, jet fuel and diesel at its Utah facility. The company declined to disclose the cost of the upgrade, citing competitive factors. Tyler Krusich, Chevron manager of policy, government and public affairs, said the reconfiguration will be done during previously scheduled maintenance shutdowns over the next three years.

In her release about the changes, Kashanchi quoted a Utah UCAIR statement that if every refiner sold only Tier 3 fuels in Utah, and if consumers upgraded cars and trucks to Tier 3 models, the pollutant reduction would be the equivalent of taking four out of every five cars off the road. “We live here and we work here and we want to have the best air quality possible,” Kashanchi said.

SB197, passed overwhelmingly and signed by Herbert on March 25, established a tax exemption for the purchase or lease of machinery, operating repair or replacement parts or products and supplies used by refineries in the conversion to producing the cleaner-burning automotive fuels. As Herbert signed the bill, he commented that the legislation “warrants more fanfare.”

Sen. Stuart Adams, R-Layton, sponsored SB197 and said lawmakers became convinced that a move toward Tier 3 fuel was critical for the state. “It’s probably the most significant clean air bill I’ve seen in recent years,” Stuart said. “We think it’s good tax policy not to tax inputs, but we also think we have significant problems with our air quality.”

The Wasatch Front in northern Utah suffers with temperature inversions in the winter that trap particulate pollution in the valleys. According to research published by the Utah Department of Environmental Quality, tailpipe emissions are responsible for about 48 percent of that pollution.

When conversion to Tier 3 fuel and Tier 3 vehicle standards are in full swing and the aging fleet of cars are retired in the next decade, air quality regulators believe about 70 percent of those vehicle emissions will be eliminated.

Herbert said the Chevron move should be an example to other refiners. Tesoro announced last year that it would move its Woods Cross refinery toward Tier 3 fuel production.

Citing the significant investment Chevron made in its Salt Lake operation in the 1990s, Kashanchi’s statement continued: “We have long partnered with many of you to help enrich educational opportunities in the state, provide basic human needs and to preserve and enhance Utah’s environment and open spaces. We have heard from many of you about Tier 3 and hope this comes as welcome news. Moreover, we hope that you will help us spread our great news, whether when discussing us or through social media.”