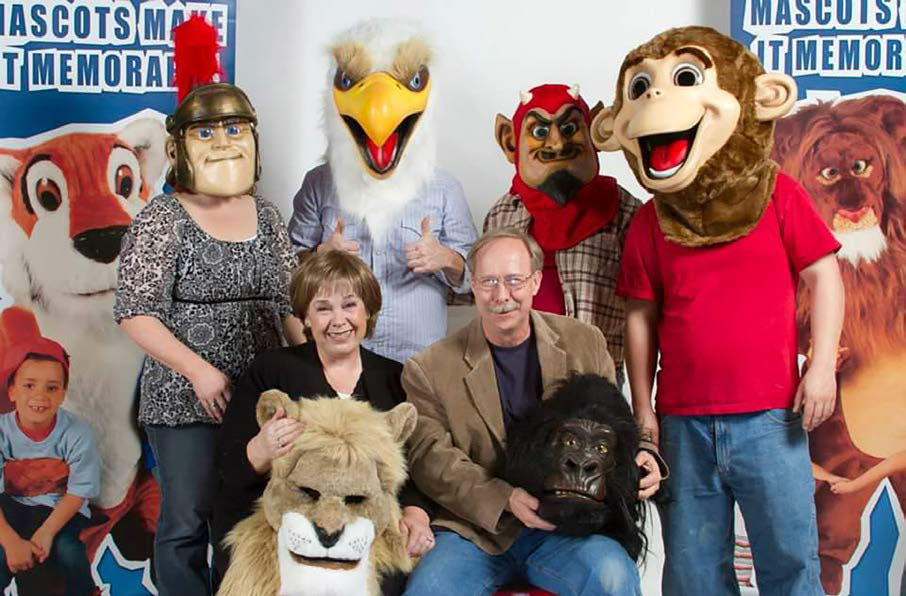 Editor's Note: This is one in a ocassionally published series of profiles of Utah companies. This week's story is furnished by CompanyWeek.com.

These characters are well-known for their respective antics at San Diego Padres, Denver Nuggets and Utah Jazz games — and they all have worn costumes made by Salt Lake City’s Alinco Costumes.

The company’s story begins in the 1880s with Salt Lake Costume Co. Clifford Allen started out mopping the floors and bought the company in the 1940s. Clifford’s son, Terry Allen, worked for the company since he was a kid.

“I grew up doing the shipping,” said Terry. “When I was 16, I kidded my brothers about the dragon that they were sculpting — it looked like a cow — so they made me do it. From then on, I was doing the sculpting.”

After clashing with his dad, Terry Allen bought the manufacturing division and spun it off as a standalone company, Alinco Costumes, in 1977. “Basically, it was a couple of sewing machines and a couple of dozen molds,” he said.

Back then, Terry Allen planned to primarily manufacture Halloween masks. “We were lucky because ‘Star Wars’ had just come out,” he remembers. “We sculpted a bunch of alien masks and even the ‘Star Wars’ people didn’t have anything out for Halloween.”

Imported masks from China soon all but quashed domestic mask manufacturing in the early 1980s, leading him to focus on mascots. The San Diego Chicken was an early breakout star for the company, followed by the dunk-happy gorilla mascot for the Phoenix Suns. Alinco also makes costumes for teams in the National Football League, the National Hockey League and Major League Baseball.

“The Sand Diego Chicken was a pretty big moment for Alinco,” said Nick Allen, Terry Allen’s son and Alinco's vice president of marketing. “We sold hundreds of chickens before Ted Giannoulas, who was the San Diego Chicken, bought one. He took that and made it what it was. It’s a real testament to the fact that a lot of it has to do with the performer inside a costume and what they do.”

The Suns’ gorilla mascot paved the way for Alinco to provide mascot costumes to about 70 percent of NBA teams. “They [Suns officials] called us and they had an image they were looking for,” said Terry Allen. “I remember we went out and bought our first fax machine so we could send pictures back and forth of what we were sculpting.

“They hired a gymnast and he was able to do a lot of things that were not happening in the rest of the league,” Terry Allen said. “After that, the Seattle Supersonics wanted a Sasquatch, and they could see the similarities. They came to us to see what we could do for them.”

That led to more and more NBA mascot costumes with more and more performer-friendly features and innovations that later became industry standards. “That’s what we’re known for today,” said Nick Allen. “If you want a really movable, wearable mascot costume that can dunk and do everything that you normally do outside the suit in regular clothes, you would come to us.”

He cites the Jazz Bear’s vision. “His eyes are the eyes of the costume. That’s something that hadn’t been done beforehand. We actually made a mold of his face and we sculpted on that.”

A fur-backed, five-fingered glove is another example. “That gives them dexterity they didn’t have before,” said Nick Allen, crediting his father with the innovation. “Most of the things that you see in the mascot industry today are things that Terry came up with us and revolutionized the industry. Other mascot manufacturers have copied and followed suit.”

Alinco now makes about 1,000 mascot costumes a year for pro teams in the NBA, NFL, NHL and Major League Baseball; colleges and K-12 schools; corporate clients; and the film industry.

Pro teams go for custom costumes typically in the $8,000 to $12,000 range. Alinco’s designers help develop the concept for free, but the company retains rights until the customer places the order.

Based out of a pair of buildings totaling about 35,000 square feet, Alinco develops designs for clients and sews the costumes in-house. The company sources artificial fur and fabrics from National Fiber Technology (NFT), Monterey Mills and other primarily domestic vendors and works with a few outside sculptors for facial features. It’s usually about six weeks from order to delivery.

The company’s guarantee is one of the industry’s best. “These are expensive and you don’t want to make this investment more than once,” said Nick. “We’ll work with a customer free of charge until they are 100 percent happy and satisfied.”

Nick credits Alinco’s employees for the company’s successes. “We have some of the most talented people around,” he said. “It’s a fun place to come and work. No day is the same. There’s always an interesting conversation in the morning about whether that purple cow shipped or that red dinosaur or whatever.”

Along with Terry, Nick works with his sisters Jill (production manager) and Rebecca (office manager) after his mother Lowla exited the company after running the sewing side of the business for decades. “Terry’s looking at retiring and the kids are looking at possibly purchasing the company,” he said.

“This is my third three-year plan for retirement,” laughs Terry. “Let’s put it this way: I’m working from home more.”

Nick says the pandemic’s impact on sporting events on all levels was a big hit. “COVID was pretty rough on us. We’ve always been pretty depression-proof. When things go down, we still do OK. This took out schools, this took out amusement parks, public gatherings, sports, everything.”

“Two weeks after the NBA shut down (in March 2020), our business dropped by 80 percent,” said Terry. “We started making facemasks for a long time, but now we’ve got the reverse problem, because we've got two years of pent-up mascot demand and everybody wants them now.”

Supply chain has also been a big issue. “Supplies have obviously been dwindling,” said Nick, noting that there aren’t many suppliers of faux fur. “NFT is the only game in town, so they can charge whatever they want.”

Chinese-made knockoffs have also presented an issue and pushed the company to focus on custom costumes, which represent the majority of sales. “They advertise their mascots for $400 or $500,” said Nick. “It’s too good to be true. We made a video on YouTube about what you get from China — what you think you’re going to get and that you get.”

Terry sees custom costumes growing at a faster clip than catalog designs. “There’s a lot more of a trend — even for high schools — toward custom mascots,” he said. “We’re actually doing a lot more promotional stuff, which is interesting. A school will contact us and say, ‘We don’t quite have the budget for that.’ Get a couple hundred T-shirts printed up and water bottles, and go out and sell them at your game, and you’ve got the money for your mascot.”

Nick also describes a vision of developing performer training, rebranding services and other mascot offerings: “I would like Alinco to become the place you come to find out about all things that are mascot-related.”

Alinco’s long relationship with its customers makes for great feedback and continued innovation. “It’s really, really good for us as far as research and development goes,” said Nick. “We have a lot of things we’ve been able to expand on or add to our line or processes we’ve figured out because of requests for our pro guys.”

“We start talking to the mascots themselves: ‘What do you need?’” said Terry. “Always before, you dealt with corporate, and they wanted this big, lumbering thing on the sidelines that couldn’t do anything. When we started talking to the mascots, they said, ‘We need to move. We can dance and do all sorts of athletic things.’”

The cosplay community has emerged as a pipeline for employees. “We do find some very talented people that have some sewing skills and some designing skills,” said Nick. “There’s some passion there.”

CompanyWeek.com is an online resource dedicated to the manufacturing economy across the western United States.