Tech notables: Utah has what it takes for success in tech world 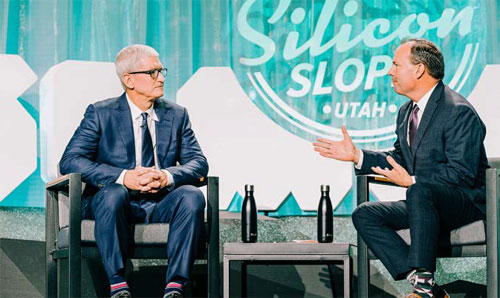 A pair of heavy hitters in the tech industry praised Utah and its tech community during the recent Silicon Slopes Summit.

Tim Cook, CEO of Apple, and Steve Ballmer, former CEO of Microsoft, took the stage during the two-day event and complimented the state, with Cook saying Utah has “all of the ingredients to be successful.”

“What I look for when I go to places is, are there people who want to change the world? Are there people that get up in the morning and think about their passion and work all day to try to get the job done?” said Cook, Apple’s CEO since 2011.

Earlier in the morning, he had met with developers at four Utah-based tech companies. “And I see that, I sense that,” he said.

One company is ResusciTech, whose app allows people to use their smartphones to ensure the depth and frequency of CPR is correct. “So they’re really trying to do something that really changes things, that helps people,” Cook said.

Another is Ancestry, focused on family history. “They’ve taken what was this long, laborious process that none of us would have been able to get through, and democratized it, and now all of a sudden, all of us can do this. It’s pretty amazing,” he said.

Instructure’s Canvas offering, Cook said, connected teachers and students when schools were closed during the COVID-19 pandemic. The user numbers “went through the enormous growth spurt of helping people learn that was the only way of learning for quite a while,” he said.

Finally, Red Games Co. has created mobile games to help children create and learn. The independent mobile game studio is developing games in partnership with LEGO, Hasbro and Crayola, as well as its own original intellectual property.

Cook said he felt the passion from the four companies to help “humanity move forward.”

“I’ve always thought that tech should serve humanity and not the other way around, right? And that is what I see here,” he said.

The area also has great universities, venture capital, and "unbelievable" developers and entrepreneurs. “All of the ingredients to be successful are here,” Cook said. “Of course, more investment is always important, particularly in education, but I’m super-excited.”

Cook recalled that he was in Utah in late 2016 when he talked at both the Utah Tech Tour organized by then-U.S. Sen. Orrin Hatch, and later at the Utah Technology Council’s annual Hall of Fame gala.

“I don’t think there’s ever been a more exciting time to be a part of the tech community,” he told the Silicon Slopes Summit crowd. “I was here at this conference in 2016 or 2017 or so, around there, and it’s just gone to whole new level. I really compliment the people that run the conference and I compliment the people of Utah that really put a priority here in the leadership.”

Ballmer’s comments about Utah came during a chat with U.S. Sen. Mitt Romney, R-Utah. The Microsoft CEO from 2000-14 and current owner the NBA’s Los Angeles Clippers described Utah as “a fantastic place.”

“Microsoft has an R&D lab here in Utah because there’s just so much engineering talent in this state. It’s really impressive. Relative to population, it is unbelievable.”

Ballmer also mentioned that his Clippers have played the Utah Jazz “a few times.”

“And if you’re from Utah,” he added, “please excuse the fact that I brought that up after the last playoffs.”