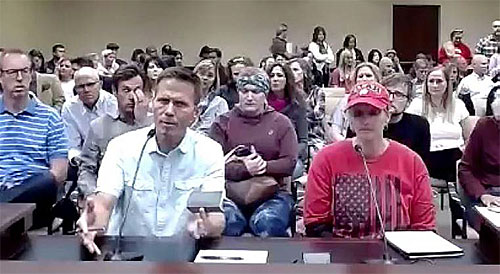 In an unprecedented turnout for a legislative committee hearing, business owners and the public last week made clear they oppose a federal government mandate requiring companies to have their employees vaccinated against COVID-19.

A crowd of about 700 packed six rooms at the Capitol and about 250 more watched online as the Business and Labor Interim Committee received testimony about Pres. Joe Biden directing the U.S. Department of Labor to require all businesses with 100 or more employees to have their employees either vaccinated, or tested negative once a week. Such a requirement would come in the form of an “emergency temporary standard,” or ETS, which would last up to 180 days. Businesses that don’t comply could face fines of up to nearly $14,000 per violation.

“This meeting is not about any legislation,” committee co-chair Sen. Curt Bramble, R-Provo, told the crowd. “There’s lots of other issues that are swirling relative to COVID — masks in schools and a whole host of policies. This meeting is specific: We need to have input from citizens relative to the federal government issuing a mandate to every citizen in the United States relative to COVID vaccines or to mandatory testing from the federal government.”

He later said the meeting was “not about businesses mandating the vaccine. This is about the federal government, at the point of a spear or the tip of a gun, imposing a mandate on the citizens, including financial sanctions of tens of thousands of dollars.”

“We’re a bit premature,” Bramble added at one point, “because we don’t have the order, but then it’s important to get the citizen input based on what has been announced.”

Any such mandate is expected to impact 80 million U.S. workers. While less than 3 percent of Utah businesses have 100 employees or more, that group employs 65 percent of the state’s workers.

A few speakers supported the idea of a mandate, saying vaccination mandates have been around for decades, that vaccinations are effective and are “good public health policy” that would protect companies’ employees and customers. But many more spoke against it, for a variety of reasons. Many said they support having people vaccinated but not having the federal government imposing it.

In conversations with Utah business representatives, Ben Hart, deputy director of the Governor’s Office of Economic Opportunity (Go Utah), said confusion is the “preeminent feedback” from those businesses. While none have expressed support for a general mandate, some would like to require all of their employees get the shots, he said.

“So, we have heard some support from some businesses who have said that they would be comfortable if they could require that all of their employees would be vaccinated, and these are companies that I think are important here in the state of Utah. They certainly have an international presence as well,” Hart said.

“Generally, I think most people are comfortable with the idea (of vaccinations). Again, the line comes with a mandate.”

“The Cox/Henderson administration has been very clear they support vaccinations and they support businesses doing this if they choose to do so,” said Jaceson Maughan, commissioner of the Utah Labor Commission. “It’s just questionable whether it’s the role of government to enforce that.”

Melissa Holyoak, Utah’s solicitor general, said the mandate rule would not comply with the emergency temporary standard statute and the rule is not necessary to protect workers. “As described, this is a one-size-fits-all rule for all employers with over 100 workers, but that does not account for a lot of workers that work from home or work outdoors,” Holyoak said. “Lastly, the rule is also unconstitutional.”

“We do,” he told the committee. “We believe and we think they work. What we oppose in the strongest possible terms is the mandate — end of story. Pretty simple for us.”

Melva Sine, CEO and president of the Utah Restaurant Association, which has 1,800 members, said restaurant workers have expressed concerns to their employers and say they do not want a vaccination mandate.

“Now, we, as citizens and as individual business owners, need to have the rights to be able to make the decisions that work best for our restaurants and our employees,” Sine said, adding that it should be left to workers whether they choose to be vaccinated, have COVID tests or wear masks.

Sine asked legislators to “please allow people to use their own good sense about business and their employees, and allow them to make those decisions relative to the vaccines or other.”

Ginger Chinn, vice president of public policy at the Salt Lake Chamber, representing 10,000 businesses, said the chamber advocates for businesses to have the right to make their own decisions in the best interests of their employees and customers without government overreach, “and we feel that this is a mandate that reflects government overreach.”

Hart said that many businesses have “really, really strong concerns” about the impacts that a mandate would have on their ability to find workers, he said. “There are real issues finding labor right now,” he said, “and this is one more impediment that could really do damage to a company’s ability to literally open their doors on a day-to-day basis.”

Rob Moore, CEO of Big-D Construction, with over 1,500 employees, said the company favors vaccinations but not a federal government mandate for them. Of the company’s 600 Wasatch Front employees, 68.5 percent have been vaccinated, but 19.5 percent say they will not get the shots and would leave the company if they were required, he said.

Already, the state is about 20 percent short of the number of craftspeople it needs. A mandate would cause larger companies to lose employees to other industries or to smaller businesses that fall outside the mandate threshold, he added.

Craig Madsen, president and CEO of J&M Steel Solutions Inc., said his company’s work is “way more life-threatening than this COVID is.”

“I’m not diminishing that, but I have more important things to worry about as an employer of a steel erector than vaccinating and seeing if they can get their weekly tests done, and I feel like this is a real big overreach and I don’t agree with it,” he said.

Spencer Young II, president of Young Automotive Group, which has over 1,400 employees, said his company believes vaccination is a personal choice and personal freedom. Most of the company’s workers have been vaccinated, he said, but employees are “scared” and “terrified” by a mandate possibility.

If vaccines are mandated, the company could lose 30 percent of its critical workforce, he said. “This would be detrimental to our business and to our future,” Young said.

In addition to concerns about the mandate representing government overreach, unconstitutionality and restrictions on personal freedom, speakers also said a mandate would be un-American, tyrannical, result in employees being treated “like slaves,” reinforce a distrust of the drug companies producing the vaccines, and hurt people fearful of losing their jobs because of their refusal to comply with a mandate. Some are worried that a temporary rule could eventually become a permanent standard and others predicted that any mandate would expand to smaller businesses and eventually to all businesses.

Dozens of people testified during the committee meeting, which lasted more than 3 1/2 hours. The crowd of nearly 1,000 was “absolutely unprecedented in our experience here at the Legislature,” Bramble said. “I don’t believe we’ve ever had, in my tenure of 21 years here, I don’t believe we’ve seen anything quite like this.”

“It’s clear,” he added, “that this has touched a nerve, it has struck a chord, with the public.”