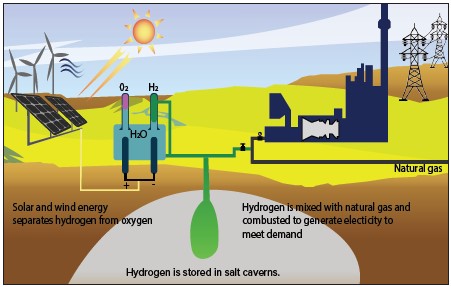 The 50-year-old Intermountain Power Agency is on track to convert its plant near Delta from coal to natural gas and green hydrogen to produce electricity. Chevron announced in September that it will acquire an equity interest in the ACES Delta, a joint venture between Mitsubishi Power Americas and Magnum Development that owns the Advanced Clean Energy Storage project.

Dubbed IPP Renewed, the project would produce, store and transport green hydrogen in salt dome caverns at utility scale for power generation, transportation and industrial applications in the western United States. The Los Angeles Department of Water and Power (LADWP) is leading the power plant conversion. The plant would use a gas turbine designed and built to operate on 100 percent green hydrogen.

Among the findings of the new report:

• The construction period, most of which will take place from 2022 through 2026, will represent a $2 billion investment, increasing the state’s gross domestic product up to 0.18 percent annually from 2022 through 2026. It will directly support an average of 500 jobs annually during this period, which will in turn support up to an additional 600 jobs across the state.

• Most of the construction jobs will be located in Millard County, where the economic benefits represent a much larger share of the local economy. There, the 450 construction jobs annually to build the new plant will represent 10 percent of the county’s average employment. This estimate does not include the extra jobs created through supply chain purchases or employees’ additional earnings.

• After completion of the project, 120 permanent IPP jobs will support up to 540 additional jobs from suppliers and the jobs demanded by increased regional earnings.

• The construction of the new converter stations will maintain a high level of reliability on the direct current transmission line and extend its life for decades to come. This could attract renewable projects to locate in the area, while providing carbon-free electricity to Southern California and potential Utah purchasers.

• After completion of the project, extra capacity will be available on the transmission lines. This means that other generation projects could develop in the area to help meet the demand for electricity in Southern California. If the transmission line were fully utilized, it could mean a direct effect of 1,300 temporary jobs and an additional 91 ongoing jobs in the community, which could support an additional 1,148 jobs during the construction phase and 410 permanently.

• There are expected additional economic benefits from the construction of renewable energy and green hydrogen infrastructure, opportunities for natural gas and other commodities storage, and the emerging production, storage and export of hydrogen gas.

Utah Foundation President Peter Reichard said projects like IPP Renewed are helping the state stay ahead of the curve economically. He pointed to larger trends in place, noting that by 2020 coal production in the U.S. had dropped to its lowest point since 1965.

“Our economy is turning away from coal-fired power,” Reichard said. “That means we will have to find new means of stimulating local economies touched by the change. The IPP Renewed project is emblematic of that transition, with significant impacts both in the near future and over the longer term.”