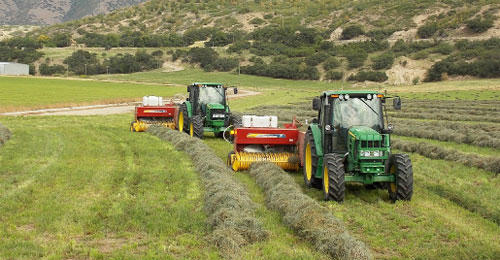 Utah state government is stepping up to help farmers and ranchers hurt by extreme drought.

The Utah Department of Agriculture and Food (UDAF)  has established an Emergency Disaster Relief (EDR) loan program to help them with their losses. A total of $5 million was approved by the Governor’s Office of Economic Opportunity (Go Utah) board to move to the department from Go Utah’s Industrial Assistance Account.

Dan Hemmert, Go Utah’s executive director, told the board that the impetus for the money move was “to get this done without a lot of bureaucracy.”

“As far as our part of this is concerned, we’re doing this in an effort to avoid a special legislative session called by the governor that would allow the Legislature to appropriate money directly to the UDAF,” Hemmert said.

He added that “it’s actually been kind of cool” to see different parts of the state’s executive branch “come together in a very fast and collaborative manner. In short, the Utah Department of Agriculture and Food … needed money, and we have money,” Hemmert said.

The $5 million will be administered by UDAF under their Agriculture Resource Development Loan (ARDL) Program. Eligible agricultural producers can apply for EDR loans of up to $100,000 to help reimburse financial and other losses they have experienced due to the drought, such as feed costs or loss of livestock.  The seven-year loans will be interest-free for the first two years and will not require collateral from the agricultural producer. To be eligible, an agricultural producer must have an adjusted gross income of less than $250,000.

Applications will be accepted until April 1, 2022, or until funds are depleted. Details are at ag.utah.gov/emergency-disaster-relief-loan-program.

“Utah’s current extreme and prolonged drought conditions have been devastating for our agricultural producers,” Gov. Spencer Cox said in a prepared statement. “These farmers and ranchers need real solutions and we are committed to helping in every way we can. Authorizing money from Go Utah will provide necessary aid to those who truly need it.”

“This year has hit Utah’s farmers and ranchers hard,” Craig Buttars, UDAF commissioner, said in a prepared statement. “We are hopeful that these loans will be a financial bridge that will allow producers to keep their operations going so that they will continue to benefit not only Utah’s rural economies but all Utahns who enjoy local agricultural products. I would like to thank Gov. Cox and his team for their support in making this relief possible.”

In a letter to Hemmert before the Go Utah board vote on the matter, Buttars said 99.4 percent of Utah is under extreme or exceptional drought conditions, putting the viability of Utah farmers and ranchers and their agricultural and economic productivity in jeopardy.

Crops have been damaged and severe hay shortages — production is down between 70 percent and 90 percent — and poor rangeland conditions have made necessary quantities of hay unavailable, while the hay that is available has doubled or tripled in price in the past year, Buttars said in the letter.

The hay and feed shortages are so severe, some producers have been forced to sell their herds, and some farmers and ranchers have considered ending their operations, he said.

Under terms spelled out in Buttars’ letter, the loans would be for losses occurring between May 15, 2021 — the date when Cox declared a drought disaster — and April 1, 2022.

Crop producers may seek reimbursement for crop loss if they can document 50 percent loss since May 15, compared to their average production over the prior three years. Livestock producers may seek reimbursement for death loss of breeding stock, the cost of replacement of breeding stock sold due to drought, and the cost of feed purchased.

Hemmert said Go Utah made the funding move “on a hope and a prayer and a promise” that the account will be replenished during the next regular legislative session.