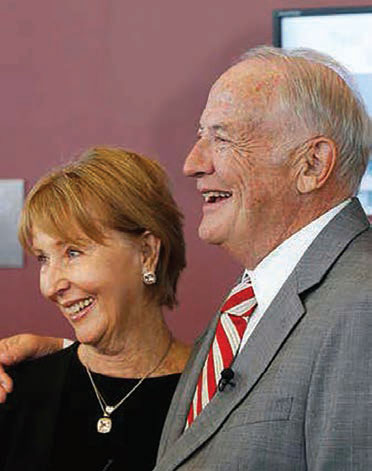 The Salt Lake Chamber has announced that Katharine and Robert Garff will be honored with the organization’s 42nd Giant in Our City award. The chamber said the award recognizes those with exceptional and distinguished service as well as extraordinary professional achievement.

“Utahns know the Garff name and the family’s success in the business community. However, some may be less familiar with their rich legacy in our state of community service and charitable contributions that have blessed countless lives through the years,” said Derek Miller, president and CEO of the Salt Lake Chamber and Downtown Alliance, in announcing the award. “For decades, Kathi and Bob Garff have been passionately dedicated to educational efforts and programs geared toward helping Utah students succeed, not only academically but in life. Without their influence, our students and community would not be the same and we are delighted to be given the opportunity to recognize these and so many other contributions.”

The award will be presented at the 2021 Giant in Our City celebration on June 24 at the Grand America Hotel.

Katharine Garff is the chair of Ken Garff Enterprises and Ken Garff Automotive, filling the positions long held by her late husband, Robert Garff. She has been a board member for many years and is also the chair of the Garff-sponsored Success in Education Foundation. She previously served as chair of the Utah State Board of Education and is member of the Utah Board of Regents.

Robert Garff, who was one of the first in Utah to die of the coronavirus in March 2020, held multiple community positions, including chairman of the board for Deseret Book Co. and board member for organizations such as Intermountain Healthcare, the Salt Lake Convention & Visitors Bureau and the Utah Commission on Volunteers. He also served as the chairman of the board of trustees of the Salt Lake Organizing Committee for the 2002 Olympic Winter Games.

Robert Garff held various leadership positions during his career, including speaker of the House of Representatives for the state of Utah, board member of First Security Bank and chairman of the Salt Lake Chamber of Commerce. He also served in many positions for the American Cancer Society.

Because of their passion for education, the Garffs founded the Ken Garff Road to Success and Ken Garff Keys to Success programs, which help Utah students succeed academically, continue their education and achieve their career goals.

Robert Garff was also a huge UofU supporter, helping fund a new building for the David Eccles School of Business and the upcoming Ken Garff Performance Zone at Rice-Eccles Stadium.

Notable honors received by Robert Garff includes Dealer of the Year from the American International Automobile Association, the Distinguished Utahn Award from the Salt Lake Chapter of the BYU Management Society, and most recently the University of Utah’s David Eccles School of Business inducted him into its Business Hall of Fame.

Robert Garff was a dedicated, lifelong member of The Church of Jesus Christ of Latter-day Saints with numerous callings, including bishop, president of the England Coventry Mission, stake president for students at the University of Utah, an Area Seventy and president of the Bountiful Temple.

The Salt Lake Chamber board of governors established the Giant in Our City award in 1969. It is given periodically by the board.