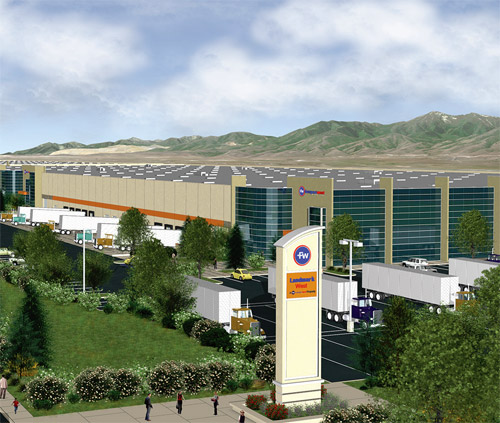 A cereal company will expand its distribution operations to include Salt Lake City in an endeavor hailed as the largest build-to-suit project in the state’s history.

Post Consumer Brands announced last week it would build a 901,000-square-foot, $50 million facility at California Avenue and 5600 West — near the Northwest Quadrant development site — that will employ nearly 100 people in manufacturing and distribution jobs.

Post is the nation’s third-largest cereal company and already has a Utah facility in Box Elder County.

“We are excited to be partnering with Freeport West and Salt Lake City as one of the first major developments near the Northwest Quadrant of the city,” said Linda Fisher, director of corporate communications for Post Consumer Brands. “This area truly represents the ‘Crossroads of the West,’ opening up great distribution opportunities for our company, coupled with a first-class quality of life to our employees.”

“In partnership with Post, we will be building an additional 1 million square feet of industrial development in this great city,” said Bradley J. Ross, Freeport West president. “This development is the first of what we hope is many future opportunities in and around the Northwest Quadrant area of Salt Lake City. We look forward to working with Mayor [Jackie] Biskupski and the council on this and many other projects.”

Lara Fritts, director of Salt Lake City’s Department of Economic Development, said Post had a tight timeline for the project.

“Our team worked closely with the city’s permitting department to provide Post with the customer service they needed to make this deal happen,” Fritts said. “Post will undoubtedly set the precedent for the types of high-quality companies that meet the city’s goals and vision.”

Minnesota-based Post Consumer Brands was formed in 2015 with the consolidation of Post Holdings Inc.’s Post Foods and MOM Brands cereal businesses. It has about 2,800 employees in the U.S. and Canada, with production facilities in Utah; Michigan; Minnesota; North Carolina; Arkansas; Iowa; and Ontario, Canada.

Post’s cereal manufacturing facility in Tremonton, Box Elder County, produces several varieties of Malt-O-Meal cereal. It has about 200 employees. The plant opened in 2003. Post says its plants in Utah and North Carolina are the only new cereal production facilities built since 2000, making them the most modern in the industry.

Freeport West’s Utah properties include nearly 9.5 million square feet in 31 buildings in and around Salt Lake City and 10 buildings in Clearfield. The company owns more than 450 acres of vacant land in northern California, West Valley City and Salt Lake City that is available for future development or to build to individual business specifications. Freeport West has been developing, leasing and managing commercial real estate since 1963.

Salt Lake City’s Northwest Quadrant includes about 28,000 acres that generally include areas west of Interstate 215 and north of State Route 201 to the northern and western boundaries of the city, excluding Salt Lake City International Airport, which is east and adjacent to the quadrant boundary. More than 9,000 acres of land north of Interstate 80 is undeveloped. The Northwest Quadrant will be the site of the state’s new prison.

The Northwest Quadrant will be the subject of planning, designing and building of an infrastructure backbone over the next two years, as well as the creation of an economic implementation plan for the area. Throughout 2017, the city will review and complete zoning considerations, develop a plan for future roadways, and complete the economic implementation plan. The goal is to complete the infrastructure backbone by the end of 2018 —two years before construction is completed on the new prison.