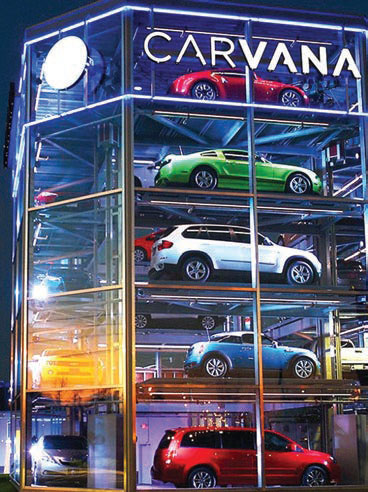 A company famous for its car vending machines has made an important selection.

Carvana, based in Tempe, Arizona, will open a vehicle inspection and reconditioning center in Tooele this year. The announcement came after the company was approved for a $757,736 tax credit incentive by the Governor’s Office of Economic Development (GOED) board.

The incentive is tied to the creation of 173 jobs over seven years, but a company official said the number of workers there actually will be higher.

“That is purely Phase One,” Todd Ward, manager of development and entitlements related to real estate for the company, told the board. “We do expect to hire several hundred over the first four to five years and look forward to coming to the city of Tooele.”

The company sells used vehicles online that then are delivered to customers’ homes or offices, or picked up at vending machines. Ward said a vending facility is planned for Lehi, but the new Tooele operation will focus on 150-point inspections that the company conducts on each vehicle. It is an assembly-line operation on cars the company buys wholesale. Reconditioning occurs if the vehicle has minor blemishes. Vehicles with major damage are wholesaled out, not sold to customers.

The $42.5 million project is expected to generate more than $53.4 million in new wages over seven years and nearly $3.8 million in new state tax revenue during that time. The incentivized jobs are projected to pay an average of $55,700.

Ward praised state and Tooele for working with the company, allowing it to open the operations by year-end.

“Because of that [cooperation], that was a much faster schedule than what we could achieve in either the state of Nevada or in the state of Colorado, both of which are on the I-80 northern route for our logistics nationwide,” he said.

While the company has most of its operations in the East, its only inspection centers west of the Mississippi River are in Fort Worth, Texas; Phoenix; and Arkansas, near the river. One will be built soon in Northern California.

“This [Tooele] facility is the sweet spot that we need in the West in order to link our logistics system on that northern route, since we do have that southern route along I-10 already covered,” Ward said.

Tooele Mayor Debbie Winn said she is grateful that Carvana selected Tooele, “not only to provide jobs for us, but help to increase our tax base so that we will be able to collect additional property taxes from this area, which will greatly benefit our community.”

Ward said Carvana will rely on the local community to help with employee training.

“With this number of jobs that we’ll be looking at over these three to four years and getting ramped up, it does require significant partnerships with the local community, so we’ll be reaching out with the help of Mayor Winn and workforce development, to vocational schools, tech schools, whatever is around that we can utilize and work with as a partnership in order to find these employees.”

“We are very grateful,” Winn said, “that they are willing to work with our technology college and will be able to train these individuals and then have [employees’] jobs right here in the community so they won’t have to leave to travel to the Wasatch Front.”

Carvana has experienced year-over-year revenue growth in excess of 100 percent for each of the past four years.

Ward said the company has been “very surprised” by the demand in the used-car market, but its business model prior to the COVID-19 pandemic already featured touchless delivery “before that was a term.”

“So we were able to continue operations when a lot of other retailers were not able to. Now, a lot of them have adjusted and have been able to continue on. But we were fortunate up there at the very beginning that we were not shut down anywhere nationwide and were continuing to operate, but it is fascinating watching the used-car market right now and how hot it really is.”

“Carvana has changed the car-buying experience, especially during a worldwide pandemic,” Dan Hemmert, GOED’s executive director, said in a prepared statement. “This expansion will allow the company to serve the state and the Southwest region better as well as create almost 200 jobs. We wish Carvana the best success as they continue to grow.”

Theresa A. Foxley, president and CEO of the Economic Development Corporation of Utah, called the Carvana project “a great win for Tooele City.”

“Furthermore, the company has committed to the community through a significant investment in workforce development,” she said. “Carvana employees will have substantial means to better themselves through training and education.”