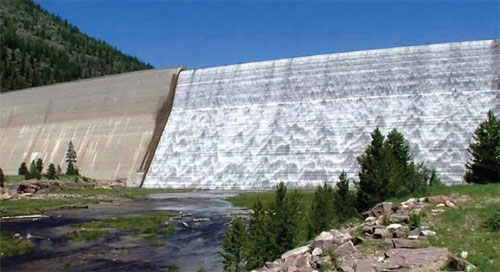 An analysis conducted by the Kem C. Gardner Policy Institute on the Central Utah Water Conservancy District’s (CUWCD) Central Utah Project (CUP) demonstrates the value of long-term water projects to communities, taxpayers and the economy, the institute said in a recent release.

The Gardner Institute studied the economic impacts of the Central Utah Project from 1960 to 2020. CUP distributes Colorado River water to Salt Lake, Utah, Wasatch and Duchesne counties, accounting for 20 percent of Utah residents. The project is managed by the Central Utah Water Conservancy District, the largest water conservancy district in the state.

“The execution of the Central Utah Project has allowed the Wasatch Front to continue to thrive and become a desirable location for families and businesses,” said Gene Shawcroft, general manager of the Central Utah Water Conservancy District. “This in-depth study has confirmed that we would not enjoy the same quality of life without this project.”

The Central Utah Project has been a large federal investment in the state, and the Gardner Institute analyzed what the project would look like without it.

“The Central Utah Project has been a $2.5 billion federal infrastructure investment in the state,” said John Downen, deputy director of economic and public policy research at the Gardner Institute and lead author of the study. “We examined the economic impacts of the 50-plus-year construction of the CUP and conducted a counterfactual analysis of how things would look had there been no federal funding. The construction of the network of diversions, dams, tunnels and pipelines generated approximately $5.9 billion in state GDP from 1960 to 2017, and the water it provides supports close to 660,000 Utahns. Without this water, consumption rates would have to be one-third lower in Salt Lake, Utah, Wasatch and Duchesne counties.”

The study found that more than 9,130 jobs were created through direct and indirect construction roles over past 60 years.

Federal appropriations paid back by users positioned the Central Utah Project to be where it is today. The study showed that had the state taken a different approach to funding, infrastructure construction would be 26 years behind schedule and state funding would have covered only 44 percent of the actual federal funding.

The full study can be accessed at https://gardner.utah.edu.