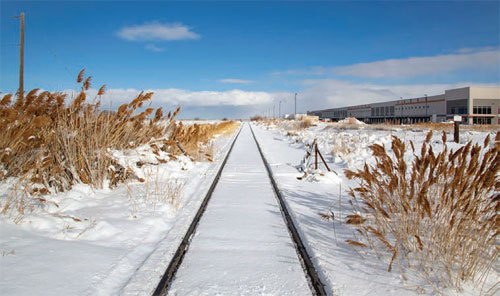 What is not a location but is instead a system? What do people envision as a single place but will instead be statewide? What has a starting point but no end?

The answer is Utah’s Inland Port.

But whatever it becomes and whenever it is developed, it appears to certainly be welcome in rural Utah. During a recent Utah Inland Port Authority meeting that took place online, several representatives from rural parts of the state praised the idea of satellite ports and expressed a willingness to be part of the improved system for moving goods through, into and out of Utah.

“We couldn’t be more excited about anything. Maybe the biggest thing that can happen to Southern Utah would be the inland port,” Frank Nichols, a Cedar City-based developer, said during the meeting.

“It’s just much bigger than most people can even dream. What we’re doing is we’re putting an interchange on the world. … If it happens, then we’re connected to the world in a better way than ever. … The world will find us. It will find all these ports. I’m just ecstatic about it.”

While much of the public’s focus — and criticism — has focused on a large site near the Salt Lake City International Airport, Jack Hedge, the port’s executive director, reiterated that the port will be a network or system including not just that Salt Lake City area but satellite ports throughout the state.

“There’s an awful lot of talk about ‘this place’ and ‘this location’ and that the port authority is building buildings and running trucks and things like that,” Hedge said, listing misconceptions about the port. “And as we know, it’s really about the system and about being around the state. There’s not a gate that you go and check in to get into the Inland Port, and I think that’s one of the misconceptions that people have.”

At the time of the meeting, representatives of 10 counties had expressed an interest in having a satellite port. Patrick Mullen, opportunity zone and financial incentives director for the Utah Association of Counties, said the process is in an “intake” step, with data being collected to better understand how to build a logistics system in the state.

As Hedge has done in the past, Mullen stressed the process is not a competition or application selection. “This is a focus on gathering data to understanding really the beginning of a much longer-term process of just ‘what’s out there?’” he said.

Stuart Clason, regional economic growth manager for the Utah Association of Counties, said the information will be used to create an “asset map” of the state.

Both government officials and businesspeople were enthusiastic about the potential positives they said satellite ports could bring.

“We believe that having a satellite port would really be beneficial to the state,” said Nate Wiberg, community planner for the Five County Association of Governments (Beaver, Garfield, Iron, Kane and Washington counties). Among that area’s positives are access to air and rail and its location via truck traffic from the ports in Southern California, he said.

“We’re super-excited about the opportunities,” said Travis Kyhl, executive director of the Six County Association of Governments (Juab, Millard, Puite, Sanpete, Sevier and Wayne counties). “We’re excited about the support. We’re looking forward to more support from you all and from the state at possibly putting in future infrastructure in our region and really trying to move things forward.”

Jason Christensen, president of ACT Aerospace in Gunnison, said a satellite port could create jobs for local residents and “have businesses where we want to live.”

Brian Carver, community and economic development director for the Bear River Association of Governments (Box Elder, Cache and Rich counties), said that area has significant logistics infrastructure and manufacturing industry clusters “that would benefit greatly from the facilitated throughput of products.”

John Houston, chairman of Intermountain Electronics, based in Price, said his company “could become as competitive as any manufacturer globally with the right infrastructure.”

“We’re ready to go,” he said of a satellite port. “It would open the world to us.”

Hedge said much of the past few months has been spent introducing the port concept to people in Utah and worldwide. The authority and the port idea have been well-received, he said, especially in light of the COVID pandemic’s impacts on the movement of goods.

“There’s been a lot of disruption in the global supply chain, and folks are beginning to recognize and look at Utah as a place to smooth out those systems, to make their supply chains function better, to make their imports and exports flow more smoothly,” he said.

After the data-gathering and data-mining is complete, the authority will work with localities and their public processes before bringing the process back to the authority to approve and authorize satellite ports, he said.

“There is a lot of open dialogue and public process to go through before we start identifying particular locations and particular inland port sites around the state,” Hedge said.

Even then, the development of a port system will be open-ended, he emphasized.