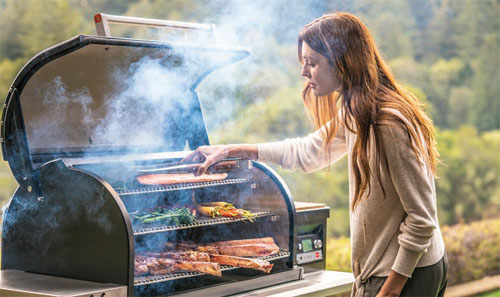 Traeger Pellet Grills LLC is cooking up some new jobs at its Salt Lake City headquarters.

The company announced a $24 million expansion project that includes up to 120 high-paying jobs over the next seven years. The announcement came after the company was approved for a tax credit incentive of up to $882,430 by the Governor’s Office of Economic Development (GOED) board.

“Traeger has been a very unique run, and I think we’re just starting to hit our stride,” Jeremy Andrus, Traeger’s CEO, told the board. “And I anticipate that we will hire substantially more than we’ve even discussed, and, boy, our business has been growing for years, but we think it’s just starting grow.”

Traeger designs, manufactures and sells wood pellet grills and related products, growing from $70 million in revenue in 2014 to $363 million in 2019. Its innovation includes Wi-Fi enabled grills. The company’s offerings include wood pellets, rubs and recipe books as well as one of the most downloaded cooking apps.

Traeger has been in business for more than 30 years and moved its headquarters from Oregon to Salt Lake City in 2015. It was approved by the GOED board in 2014 for a tax credit of $503,537 tied to the creation of 164 high-paying jobs over seven years.

The new expansion’s incentivized jobs are expected to pay an average of $90,000. Positions will include sales, marketing, IT, logistics, accounting, engineering/product, legal and executive level management positions. The new facility will add product testing, content and production kitchens.

Andrus said it will be “not just a place to do business but the mecca of grilling,” with the potential for a retail food/coffee shop, Traeger retailing, and opportunities for people to see how the company develop products and content.

The expansion will be in the Granary District area of downtown Salt Lake City, near the 600 South off-ramp.

“It’s been an area that Salt Lake City has focused on for redevelopment for a number of years,” Wadsworth said. “It’s part of a federal Opportunity Zone as well. So it’s an area that desperately needs this type of growth and we’re really excited that Traeger has committed to being one of the anchor tenants of that area, to really revitalize that part of the city and expand the job creation opportunities outside of the central business district.”

“I love this district,” Andrus said. “This is what I’ve always wanted to find for Traeger — sort of a gritty, old building in sort of a gritty but revitalizing area. It feels like the heritage of the Trager brand meets newness and technology and innovation.

“So this is perfect for what we’re doing. And I will say that it’s truly an opportunity to put a stake in the ground, to really build something that’s lasting, that really sort of has this equal mix of heritage and DNA of who we’re trying to become, in an area that is changing, and we’re excited to be part of it.”

A few GOED board members praised Traeger for its success.

“We all know what Traeger is,” said Mel Lavitt, chairman of the GOED board’s incentives committee. “They have revolutionized grilling with their pellet grills.”

“Thank you,” board chair Carine Clark told Andrus, “for taking a company that was going nowhere, moving it to Utah and making it one of the most fabulous companies that not only employs people but has a brand worldwide.”

The project is expected to result in new wages of $56.8 million over seven years and nearly $5.9 million in new state taxes.

“As Traeger continues to grow, so does the popularity of its products,” Val Hale, GOED’s executive director, said in a prepared statement. “We’re glad to have such a well-known product headquartered in our own backyard. A unique part of this new expansion is that its new facility will be located in an Opportunity Zone, which will help revitalize the Granary District of downtown Salt Lake. We wish Traeger all the best with this expansion and its continued growth.”

“It’s not surprising that, in these times, a manufacturer of cooking equipment for the home market should be on a sharp upward growth trajectory,” said Theresa A. Foxley, president and CEO of the Economic Development Corporation of Utah. “We are pleased that Traeger Grills is choosing to continue their expansion in Utah.”