COVID delayed the launch, but Breeze Airways set to take off 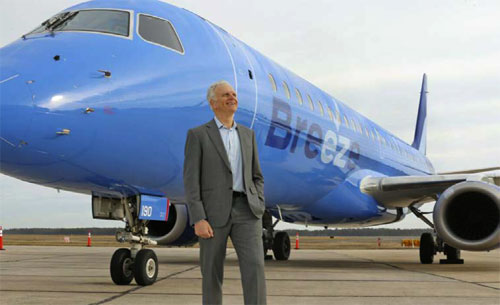 The way things turned out, 2020 wasn’t a very good year to start a new airline.

A couple of years ago, to great fanfare, Salt Lake City native and JetBlue Airways founder David Neeleman announced he would start a new low-price U.S. airline with above-average service catering to underserved markets. The business plan and timeline that Neeleman laid out was right on track for a launch this fall — then the COVID-19 pandemic hit. It seems the world has taken most of 2020 off from airline travel.

With the U.S. airline industry facing its worst financial crisis ever, Neeleman has altered his plan, delaying the launch into 2021.

But the plan is still in place and seems to be going well. Neeleman, who will call his Salt Lake City-based venture Breeze Airways, has hired a full executive team, and on Sept. 21, after receiving permission from the Federal Aviation Administration — called “Gate 2” clearance — Breeze began training pilots and flight dispatchers.

And the money Neeleman needs for his startup seems to be there. Breeze Airways closed on $83 million in Series A financing earlier this fall, bringing total funding since announcement to more than $100 million. The latest round of capital is led by Peterson Partners of Salt Lake City with participation from Bend, Oregon-based Sandlot Partners. Peterson Partners also invested with Neeleman when he founded JetBlue Airways in 2000 and Azul Brazilian Airlines in 2008. Neeleman characterizes the new investment in Breeze as “providing it with more than adequate balance sheet strength to launch its new operations.”

Breeze is Neeleman’s fifth airline, which include, in addition to JetBlue and Azul, Morris Air, founded in 1992 and sold to Southwest Airlines in 1993 for $120 million; and WestJet that was founded in Canada in 1994 and went public in 1999. WestJet is now Canada’s second-largest commercial carrier behind Air Canada.

With launch now targeted for March 2021, Breeze will begin operations focused on underserved airports in the Southeastern United States. “As major airlines retrench their networks in response to decreased travel demand, Breeze sees even more opportunities to serve smaller cities currently reachable, if at all, only through connections and the corresponding increased travel times,” it said in its Sept. 28 filing to the U.S. Department of Transportation.

But Breeze will start small, it said in the filing. It will launch with 100-seat Embraer E195 jets flying seven routes, the filing said, three from a “Southeastern United States airport,” and four from “another airport farther south.” Industry analysts say Breeze is being vague so other airlines do not fly its routes before it announces them. In “subsequent months,” the airline told the government, it will add routes from those two airports, and open a third base, also in the Southeast. By July, it will add a fourth airport, again in the Southeast and by October, it will add two more Southeastern airports, it said. Most of Breeze’s likely base airports have limited air service today.

“Although adjustments have been made to its plans, Breeze’s mission of providing nonstop service to underserved markets across the country remains unchanged,” the airline’s federal filing said.

At one point, Breeze had wanted to start by flying charters, but that is no longer the plan, the company has said. It expected robust demand among college sports teams, but said the “disruption in college sports caused by COVID-19, no longer makes that plan viable.

The Embraer aircraft that will comprise the Breeze fleet at launch will be leased from Azul Airlines. Neeleman remains chairman of the board of Azul. The Embraer jets were always intended to fill a short-term gap, with the airline planning to build its fleet with the Airbus A220-300, a relatively small aircraft with coast-to-coast range and impressive fuel economy. Breeze’s initial order of 60 Airbus jets has been delayed and will begin arriving in August 2021.

“It’s hard to believe it was two decades ago that we launched JetBlue,” said Neeleman. “I’m personally so excited now to introduce Breeze, especially with the support of great financial partners like Peterson Partners, Sandlot and all of our investors. We believe that Breeze can make travel simple, affordable and convenient for millions and millions of customers.”

“Peterson Partners has enjoyed over 20 years of partnership with David Neeleman, now across three airlines and we are thrilled to be backing him again. Our mission is to help great people build great businesses and it doesn’t get better than David Neeleman and Breeze Airways,” said managing partner Clint Peterson of Peterson Partners.

“It’s an honor for Sandlot to partner with such an exceptional entrepreneur and founder in David Neeleman. True to form, he’s assembled another all-star leadership team, developed a first-class guest experience and built an airline that will provide more choices to consumers in smaller, underserved markets,” said Sandlot managing partner David Jensen.

At some point, the coronavirus pandemic will wane and the U.S. airline industry will have a robust recovery. With David Neeleman’s track record, don’t be surprised if Breeze Airways is out front leading the way.