Williams bringing 300 jobs to Ogden from its Mexican plant 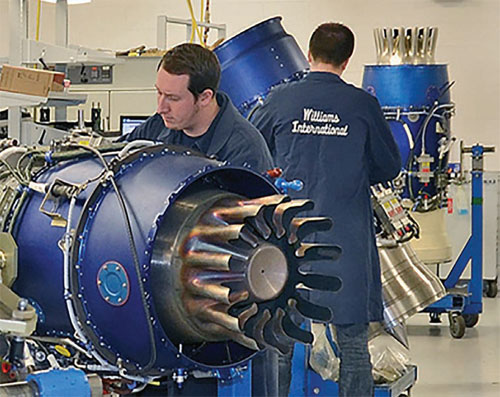 A jet engine manufacturer will add 300 jobs at its Ogden plant as it moves production work from a Mexican facility shuttered after a fire in May.

Williams International made the announcement after being approved for a $6.8 million tax credit incentive for the $60 million project by the Governor’s Office of Economic Development (GOED) board.

“Those of you on the board know that we’ve been focusing on aerospace and defense and the supply chain and bolstering that here to provide a lot of those supply chain services to the large Tier 1 suppliers, so this is right in our wheelhouse and we couldn’t be more excited to have them doubling down on their footprint here in Ogden,” Thomas Wadsworth, GOED’s associate managing director, told the board at its September meeting.

The company develops, manufactures and supports small gas turbine engines and provides research and development services for the U.S. defense industry and aftermarket services to its commercial and defense customers. The engines are primarily used in cruise missiles, drones and small jet aircraft. Its largest market is turbofan engines for general aviation, where Williams offers products providing 1,000 to 3,600 pounds of thrust.

Founded in 1955, the privately held company operates research and development and repair and overhaul out of its headquarters in Pontiac, Michigan. It has additional locations near Ogden Hinckley Airport, where it has more than 500 workers, and Walled Lake, Michigan. The fire occurred in Guaymas, Mexico, near Mexico City.

The new Ogden project is expected to result in new wages of $91.3 million over seven years and new state tax revenue of $34 million during that time. The new jobs are expected to pay an average of $54,000.

The company received an incentive from the state in 2004, tied to the creation of 156 jobs when it had about 300 workers in Ogden. Wadsworth said it is “great to have, 15-16 years later, an opportunity to help the company grow, and they’ve been a tremendous partner the past 15-16 years.”

“This is a terrific asset,” said Carine Clark, the GOED board chair. “This is a terrific business to be added to our community, especially in Ogden. … [It’s] unfortunate what happened in Mexico, but it’s a great opportunity for us to show what we can do for them.”

Theresa Foxley, president and CEO of the Economic Development Corporation of Utah, said the Williams project is a “terrific win,” adding that the company has “a storied history in the state.”

“It’s the continuation of the expansion of aerospace in this region, and it’s fairly significant because of the types of jobs that it is, and it isalso I helping us in the redevelopment of the airport,” Tom Christopulos, director of community and economic development for Ogden City, told the board.

“We’re very committed to the community and the expansion and think it will be very good for everybody,” said Gary Schopa, the company’s senior vice president and chief financial officer.

“As one of our largest employers and a key business in our aerospace and defense industry cluster, we are excited that Williams International chose to expand its footprint in Ogden,” Ogden Mayor Mike Caldwell said in a prepared statement. “This project will bring more quality, high-paying jobs to our community and support the city’s efforts to develop Ogden Airport as a regional center for the aerospace and defense industry.”

“Williams International currently has 500 employees in its Ogden facility, and we’re excited for them to add another 300,” Val Hale, GOED’s executive director, said in a prepared statement. “The company has experienced tremendous growth over the years, and we look forward to seeing its continued success.”