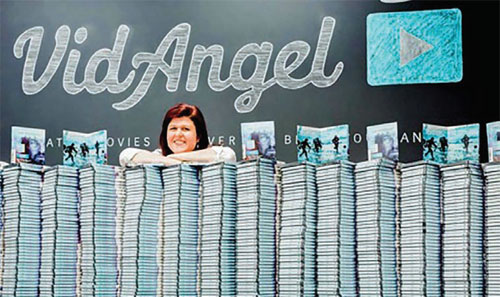 VidAngel, a Provo-based start-up that filters profanity, sex and violence from Hollywood movies for online streaming, has settled its four-year legal battle with a group of Hollywood studies led by Walt Disney Co. and Warner Brothers, the company announced last week. In June 2019, a California federal judge awarded $62.4 million in damages to studios that accused VidAngel of copyright infringement.

The settlement will allow VidAngel to fully emerge from bankruptcy, according to VidAngel CEO Neal Harmon. VidAngel filed bankruptcy last year to protect itself from the huge damages while it negotiated a settlement with the studio group, which also included 20th Century Fox, Lucasfilm, Marvel, NewLine Cinema and Castle Rock Entertainment. The new agreement was finalized in the Utah bankruptcy court of Judge Kevin R. Anderson.

“After a long and extremely difficult legal battle in one of the biggest copyright cases in decades, we have finally come to an agreement in which VidAngel can emerge from bankruptcy and move forward as a rapidly growing company,” said Harmon. “As with any compromise, we had to make painfully difficult concessions to arrive at this agreement, as did Disney and Warner Brothers.”

“We want to thank the team at Disney and Warner Brothers for negotiating this settlement in good faith,” Harmon continued. “We also want to thank our fans and supporters, millions of people who have stood with us through thick and thin over the last four years of a battle that all-too-often looked lost and hopeless. Now, we can reward you for all of your support with incredible original content like ‘The Chosen’ and ‘Dry Bar Comedy’ and expand our mission to help you make entertainment good for your home.”

Harmon said VidAngel plans to move forward by continuing to create original content for viewers while still helping families feel as though entertainment content is safe for their children to experience. The company recently announced that its faith-based multipart series “The Chosen” will have a second season which will be produced in Utah. Recounting the life of Jesus Christ, the second season of “The Chosen” will be filmed in Utah at the state’s version of ancient Israel in Goshen, Utah County, where The Church of Jesus Christ of Latter-day Saints built a replica Jerusalem movie set to film scenes from the Bible and the Book of Mormon.