New airport not only an economic hub, but a memorable experience 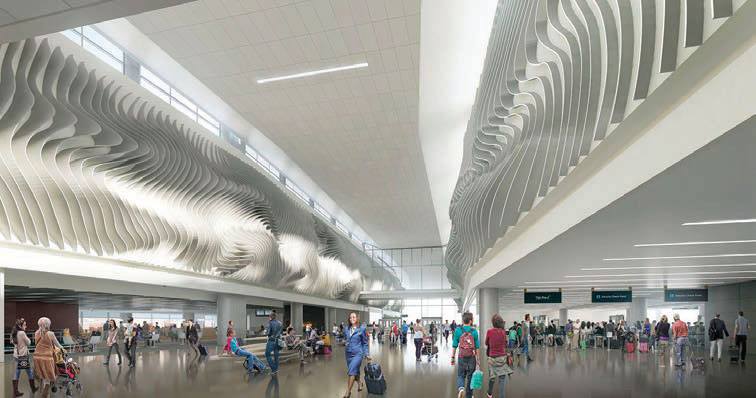 Even if travelers never set foot outside Salt Lake City International Airport, the airport’s redevelopment is designed to give them a memorable taste of Utah.

That was the widespread sentiment during a recent unveiling of the first phase of the airport’s eventual $4 billion expansion. While the project will make the airport more efficient, convenient and environmentally friendly, its panoramic views of Utah on the outside and large-scale art installations inside are expected to connect travelers with Utah’s culture and natural beauty.

“It’s incredible to me that, for so many people, the only touchpoint they ever get is passing through an airport, but yet it leaves that impression on their minds about a city, basically just by spending a few hours in one location — in their airport,” Lt. Gov. Spencer Cox told a crowd gathered in-person and online for the unveiling.

The art is impossible to miss. For example, at 362 feet in length, “The Canyon” occupies the east and west sides of the new main terminal and reflects Utah’s slot canyon landscape.

“These artful creations and so many more give this building a soul, before people even come through, and it’s one that will surely resonate with passengers from the world over, even if they’re only passing through,” said Salt Lake City Mayor Erin Mendenhall.

“This airport will an play integral role as Salt Lake City continues to grow and businesses expand here. It’ll be an economic engine for our entire state and our region, and it’s going to add a memorable location and hub for our visitors and families and transplants alike.”

The $4.1 billion, 4 million-square-foot project is the state’s largest public works project ever and is expected to have a $5.5 billion economic impact. It will allow the 100-year-old airport to accommodate more than 34 million travelers each year, up from the 26 million it currently handles.

“This moment has been 25 years in the making,” Bill Wyatt, executive director of the Salt Lake City Department of Airports, said as he displayed the airport’s 1996 master plan, which envisioned such a massive redevelopment. “It’s pretty amazing to think that back in 1996 this vision existed, the seed was planted, and here we are, these many years later, celebrating this.”

The project nonetheless took a few years to become reality. Then-Mayor Ralph Becker announced the project in 2012, and the design unveiling and groundbreaking occurred in 2014.

“An amazing, amazing house that you all built” is how Delta vice president Scott Santoro described the airport, one of four Delta “fortress hubs” in the U.S.

Some of the project statistics include 7 miles baggage conveyor belts, 65 elevators, 31 escalators and 32 moving walkways. The terminal and concourses eventually will be home to 58 shops and restaurants, and a new Greeting Room will be able to accommodate up to 400 people.

Wyatt noted that the project is “on time and on budget” and will be ready for the public to see starting Sept. 15. “There may be a few guys running around with light bulbs and screwdrivers, but we’re going to be open on the 15th,” he said.

Wyatt lauded the work of thousands of people who had contributed to the project over the years — from its conception to its planning, from its design to its construction.

“It’s impossible to recognize them all,” he said, “though each who have had their fingerprints on this project will know that family, friends, neighbors all will understand the value, the contribution represented by this airport, which will serve Salt Lake and Utah for decades and decades to come.”