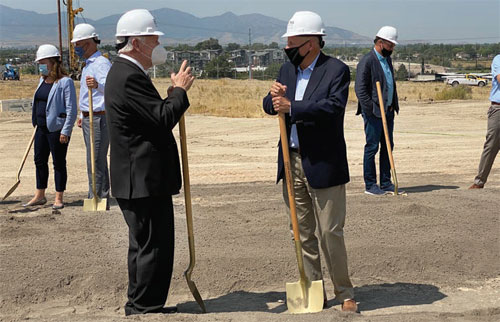 The recent groundbreaking for Zions Bancorporation’s Technology Center in Midvale featured several speakers, each touching on opportunities the center will provide when finished in 2022.

Announced earlier this summer, the 400,000-square-foot technology campus will be the company’s primary technology and operations center, serving seven affiliate brands in 11 western states. It will accommodate more than 2,000 employees who will serve individuals and businesses from Texas to the West Coast.

Harris H. Simmons, Zions Bancorporation chairman and CEO, said he envisions the center to be a place “where innovation will flourish.” That would follow earlier Zions innovations, including encrypted digital certificate transaction infrastructure and image capture technology to deposit checks remotely.

“My hope is that we’ll be able to continue to incubate great ideas and that there will be a lot of creativity that takes place on this site in the years ahead,” Simmons said at the ceremony at 7850 S. Bingham Junction Blvd.

On a bluff overlooking the Jordan River Parkway, the site is a former Sharon Steel mill location that became contaminated. About 1,500 people will work during construction by Okland Construction and Layton Construction. The building was designed by WRNS Studios and Method Studios and will be managed by Gardner Co. Colliers International assisted in the negotiation of the transaction for Salt Lake City-based Zions.

The center will try to attain a LEED Platinum designation, use solar panels to provide 75 percent of its electricity and be part of a restoration of the river corridor.

Gov. Gary Herbert said the project is “a significant reclamation effort, of taking a site that really was toxic … to changing to something very positive.”

“Twenty-four months from now,” Simmons said, “[it] will be the home to one of the nation’s most environmentally friendly and compatible workplaces. So that’s a really exciting transformation, about as far as you can come from one end of the spectrum to the other. …

“This is a beautiful spot, and we’re going to build a beautiful building that will do justice to the location that we have here, overlooking the Jordan River, and it’s going to bring the kinds of job opportunities that will be of benefit not only to those who work here but to the surrounding businesses that our employees patronize and the surrounding communities in which many of them will live.”

Clint Betts, CEO of Silicon Slopes, commended Zions for its influence on the state’s tech community. “Zions Bank is an important and critical part of Silicon Slopes. … We would be nowhere near where we are today were it not for Zions Bank and the contributions you have made to our community,” Betts said.

Aaron Skonnard, CEO of Pluralsight, co-founder of Silicon Slopes and a member of the Zions Bancorporation board of directors, said that among the center’s benefits will be to attract tech talent to Utah from across the country.

“This a clear representation of the continued expansion and growth of Silicon Slopes,” Skonnard said. “We see a lot of new companies coming up in the state, there’s a lot of talk about the startup ecosystem, but it’s equally exciting to me to see established, pioneering companies like Zions Bank growing, expanding and driving tech forward here in Utah.”

The Zions center will be part of Gardner Co.’s 200-acre, office-anchored, mixed-use development dubbed View 78. The site can accommodate up to 1.5 million square feet of new Class A office/tech workspace, 20,000 square of retail space, and is also entitled for 3,500 residential units.

View 78 is an extension of Gardner’s View 72, on a separate 250-acre plot. View 72 is already fully built out and consists of 1.5 million square feet of Class A office space, 1,800 residential apartment units, a hotel and retail space.

“It will have a lasting impact, not just on our economy right now but in the years to come,” Cydni Tetro, founder of Women’s Tech Council, entrepreneur and CEO of ForgeDX, said of the Zions project, “and it will change what will become available as opportunity for the generations to come behind us.”