There are Misfits coming to Utah - and bringing 670 jobs 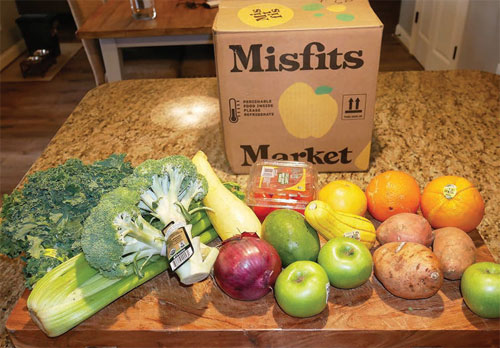 (Insert you own joke here.)

It’s true, in the form of Misfits Market, which will build a 200,000-square-foot cold storage facility in West Jordan to distribute fruits and vegetables that it describes as “always fresh, sometimes normal.” The $25 million project also will serve as the company’s West Coast headquarters.

The announcement came after the company was approved for a $429,601 tax credit incentive by the Governor’s Office of Economic Development (GOED) board, at its August meeting. The incentive is tied to the creation of 105 jobs that will pay an average of $90,500. In all, the project will create 670 jobs. Positions will include operations, fulfillment, engineering and customer service teams.

Based in New Jersey, Misfits Market is a direct-to-consumer produce delivery subscription service that offers produce that does not fit grocery store standards or are from surplus harvests. On its website, the company says it offers “sometimes funny-looking, always delicious produce.”

“We source high-quality organic produce that has a few quirks — onions that are too small, potatoes that are shaped like your favorite celebrity, and carrots that fell in love and got twisted together,” the website says. “It may sound like a joke, but billions of pounds of this fresh and delicious food is tossed each year because grocery stores only want ‘perfect’ foods on their shelves.”

The food also might have been discarded for other reasons, such as a farm’s customers having over-ordered an item that they requested be prepped a certain way or they can no longer afford to pay for an order of normal produce.

Misfits Market tries to find use for the nearly half of all produce harvested in the U.S. that is never eaten because of those situations. It sells imperfect produce directly to consumers, at prices up to 40 percent less than traditional grocery stores. Its “Mischief Box” is $22; the “Madness Box” costs $35.

Mel Lavitt, chairman of the GOED board’s incentives committee, said the food is “not exactly round or a little bit off-color, but there’s nothing wrong with eating them, using them as a food source.”

“It’s an extremely exciting product offering for a lot of people who are looking for affordable, fresh produce,” said Thomas Wadsworth, GOED associate managing director. “We’re excited to have them expanding here in Utah.”

Theresa Foxley, president and CEO of the Economic Development Corporation of Utah, said Misfits Market is “a very cool way to have more efficiency in our food system.”

A board member asked about the impact that COVID-19 has had on the company. “It’s been extremely interesting,” Wadsworth said. “In just the few months that we’ve been working with them, they’ve seen their business grow exponentially as a result of the pandemic and other things, so it’s a real opportunity for this business.”

The West Jordan project is expected to generate new total wages of nearly $28 million over five years and new state tax revenue of nearly $2.9 million during that time.

“We are thrilled Misfits Market has chosen West Jordan as the permanent location for its new distribution and customer service facility,” Dirk Burton, West Jordan mayor, said in a prepared statement. “This project aligns well with the many food-based, manufacturing and distribution centers already operating in West Jordan and reflects continued confidence in the city’s stable business environment and excellent workforce.”

“Misfits Market has a unique business model that is helping solve our global food waste problems,” Val Hale, GOED’s executive director, said in a prepared statement. “With this growth, Utah residents will have access to over 400 types of food items at a 30 percent to 40 percent discount. We look forward to watching this company grow and are glad they decided to establish operations in our state.”

Foxley said the company’s decision to place operations in Utah “epitomizes the strengths of our logistics and distribution industry, and the geographic good fortune we enjoy as the ‘Crossroads of the West.’ With heightened focus on questions of supply chain and food security, Misfits Market is a very welcome addition to our state’s economy.”