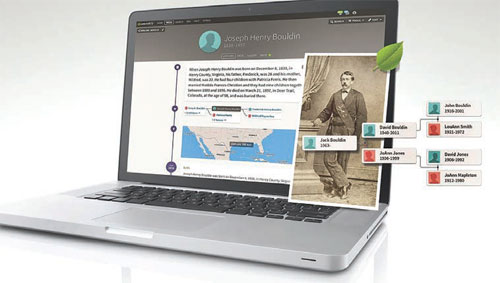 New York City-based Blackstone Group Inc. is betting on the world’s growing fascination with genealogy and DNA-based family-tree chasing. The private equity firm has purchased Lehi-based Ancestry.com Inc. from investment rivals in a deal worth a reported $4.7 billion, which includes debt assumption.

Ancestry is the world’s largest provider of DNA services, allowing customers to trace their genealogy and, with recently upgraded AncestryHealth, identify inherited health risks. The DNA tracing is done with test kits sent to customers’ homes.

Blackstone is apparently hoping that more consumers staying at home amid the COVID-19 pandemic will turn to Ancestry.com for its services. Talks between Blackstone and the previous owners regarding Ancestry.com started a few months ago, when much of the world was at home and looking for things to do, people with knowledge of discussions told Bloomberg.

“Looking ahead, in collaboration with Blackstone, we will continue to leverage our unique content, powerhouse consumer brand and technology platform to expand our global family history business while bringing to life our long-term vision of personalized preventive health,” said Margo Georgiadis, president and CEO of Ancestry, in a press release.

“We believe Ancestry has significant runway for further growth as people of all ages and backgrounds become increasingly interested in learning more about their family histories and themselves,” said David Kestnbaum, a Blackstone senior managing director, in a statement.

The deal is Blackstone’s first acquisition out of newly organized Blackstone Capital Partners VIII, the largest-ever private equity fund that raised $26 billion from investors last year. According to Bloomberg, Blackstone’s new fund is flush with cash as investors continue to bet big on the firm amid the uncertainty caused by the COVID-19 pandemic. Bloomberg executives are touting their success in navigating the 2008 financial crisis to show investors its financial prowess in troubled times.

Blackstone purchased Ancestry from Silver Lake Management of Menlo Park, California, Spectrum Equity of Boston and London’s Permira Equity. Sovereign-wealth fund GIC Pte, the investment arm of the Singapore government, will continue to hold a minority stake in the company. The acquisition’s price tag represents a significant jump in Ancestry’s valuation from four years ago, when Silver Lake and GIC invested in the company at a $2.6 billion valuation.

Ancestry.com has more than 3 million paying customers and over 18 million people on its DNA network in about 30 countries. It has had more than $1 billion in annual revenue yearly since 2017. Launched in 1996 as a family history website, it harnessed advances in DNA testing and combined them with mobile phone apps in the following two decades to expand its reach and popularity. It currently employs over 1,000 in its Utah operations.

Ancestry.com has had an interesting ownership history. The company went public in 2009, raising $100 million. It was then returned to private ownership in 2012 in a $1.6 billion buyout led by Permira. Analysts have said the company has considered going public again on at least two occasions, but it never got the valuation it was seeking.