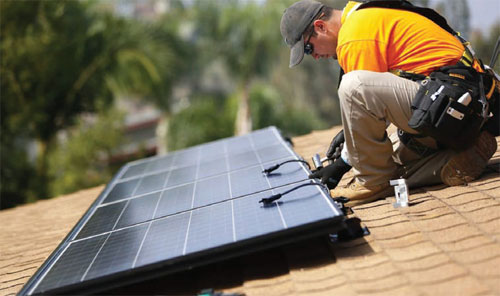 Lehi-based Vivint Solar, the nation’s second-largest residential solar company, has been acquired by Sunrun Solar of San Francisco — the nation’s largest. Board members of both companies unanimously approved the deal which has an enterprise value of $3.2 billion, Sunrun said in a statement. The transaction creates one of the world’s largest solar equipment providers.

The CEOs of the two companies addressed the acquisition in a conference call with media and Wall Street analysts earlier this month when the deal was announced. Vivint CEO David Bywater will join the Sunrun board of directors when the deal closes later this year following expected approval by stockholders and regulators, Sunrun co-founder and CEO Lynn Jurich said.

If approved, the all-stock deal would create a company with about 500,000 customers, Jurich said. The sale price of $3.2 billion includes the assumption of Vivint debt by Sunrun.

“As this (acquisition talks) process has progressed, it has become increasingly clear that the combination of Vivint Solar and Sunrun is the best way to create value for consumers, shareholders and our partners,” Bywater said.

The acquisition will combine two companies with significantly overlapping business models and similar visions for a distributed energy future. Though Sunrun and Vivint Solar have slightly different geographic coverage areas, both install rooftop solar across much of the country through leases, loans and direct sales. In addition to residential solar panels, Sunrun and Vivint sell residential battery systems.

“We have big ambitions for what we can accomplish together,” Jurich said on the call with analysts and reporters. “We are only scratching the surface of our opportunity. Today only 3 percent of U.S. households have made the transition to home solar. At a larger scale, with more customers and a lower cost structure, Sunrun will be a meaningful contributor to a fully renewable and electrified energy system,” she said.

This isn’t Vivint Solar’s first shot at acquisition by a larger renewables company. SunEdison offered to acquire it for $2.2 billion in 2015, but that deal fell apart in March 2016. Analyst see no roadblocks to the success of the current deal.

“There’s a mandate to continue to lower costs,” Jurich said. “The businesses are so complimentary. So, for us this was the right time to pursue this. “We’ve been incredibly impressed with David and the team’s commitment to the highest-quality sales consultation process and installation quality.”

Shares of both companies soared following the July 4 weekend following the announcement. Sunrun’s stock closed up more than 22 percent and Vivint closed up about 38 percent the day after the knowledge of the deal went public.

While the renewable energy industry has weathered the coronavirus pandemic much better than oil and gas businesses, residential solar installations have dropped as many homeowners have cut spending and reduced interactions with other people, according to Ravi Manghani, a research director for Wood Mackenzie. Analysts expect Sunrun’s revenue to dip by nearly 5 percent this year and Vivint’s revenue to increase by less than 5 percent, according to Bloomberg.

Cost efficiencies will be critical to expanding residential solar markets in the mid-2020s as the federal Investment Tax Credit for solar steps down, Manghani, Wood Mackenzie’s head of solar said in an email. “While it will be months, if not years, unil the outcome of the acquisition will be clear, I do think there’s something in here, strategically speaking. Vivint, with its direct sales channel and healthy margins on system sales, offers Sunrun an expanded canvas and an opportunity to capitalize on higher storage attachments and grid services plays, all while potentially improving operational and financing costs.”

The combined company believes it will be able to save $90 million a year in expenses, according to Sunrun CFO Tom vonReichbauer. More than 95 percent of Vivint’s branches are in similar locations as Sunrun’s, and half are within 10 miles. Sunrun can eliminate one-third of the total physical locations between the two companies, saving on rent and overhead. The combined company could also save money by consolidating IT platforms and getting better deals buying solar and storage equipment.