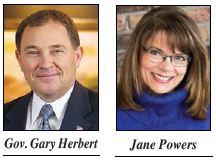 It won’t be your typical “Giant in Our City” gala.

The Salt Lake Chamber annual soiree — traditionally a black-tie event at the posh Grant America Hotel — was originally was scheduled for March 26. Delayed because of the COVID-19 pandemic, the event this year will take place June 11, 6-9 p.m., at the Redwood Drive-In Theatre, 3688 Redwood Road, West Valley City, with attendees encouraged to wear “summer chic,” enjoy picnic food — one basket supplied per car — and listen to event audio through FM radio.

Traditionally the chamber’s most important fundraising event, the Giant in Our City will begin with music and audience interviews with Jason Hewlett. Audience members also are being asked to observe social distancing guidelines by parking at least 10 feet from other vehicles.

Gov. Gary Herbert will receive the 41st Giant in our City award, which honors “those with exceptional and distinguished public service and extraordinary professional achievement.” Jane Powers will be honored with the second annual Lane Beattie Utah Community Builder Award at the event.

Herbert has served as governor since August 2009 and since then has seen Utah be recognized as having the nation’s best and most-diverse economy. Herbert started a real estate brokerage and development company, Herbert and Associates Inc., before serving as a Utah County commissioner for 14 years, and he served as lieutenant governor for five years prior to becoming Utah’s 17th governor. He is not running for re-election this year.

“Over the past 20 years, Gov. Herbert has worked with a singular focus of making Utah the top state in America to live and work — from fostering economic growth after the 2008 recession, increasing education funding as his highest budget priority, attracting world-class businesses, supporting innovation and investment, and keeping our communities vibrant,” Derek Miller, president and CEO of the Salt Lake Chamber and Downtown Alliance, said in December when announcing Herbert as the award recipient.

“Because of Gary Herbert, Utah is the best place to ‘live, work, learn and play,’ and his influence will be felt for years to come.”

“Jane epitomizes all that the Lane Beattie Utah Community Builder Award stands for,” Miller said in February. “She is everything you could ever want in a health care professional:  compassionate, dedicated and experienced. Jane donates endless time and energy to help improve the lives of thousands of Utahns, from working as an ER nurse at Intermountain Medical Center to co-founding Utah Hope Clinic and opening the Maliheh Free Clinic. This recognition is a token of our gratitude for her commitment to advance access to critical medical care for our state’s underserved.”

Powers is the clinical director of Hope Clinic, where she works with volunteers to help remove barriers that underserved populations in the community face when trying to obtain quality medical care. She opened the Maliheh Free Clinic in 2005.

“Jane is special because her enthusiasm and energy for this work are infectious,” said Clark Ivory, co-chair of the advisory board. “Her tireless efforts inspire hundreds of volunteers, allowing her to provide an unmatched level of care at an extremely low cost per patient. Jane’s leadership and work create miracles for patients, families and our community.”