Coronavirus will mean 'new normal' for startups looking for capital 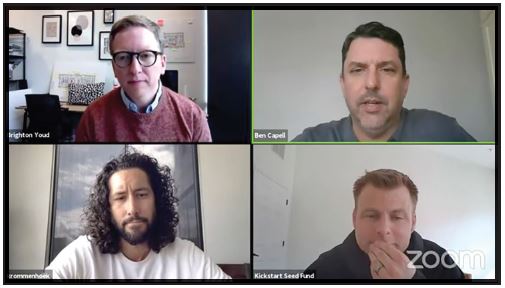 Utah startups looking for investors will face a “new normal” over the next couple of years.

That is the consensus of some investment leaders who gathered recently for a webinar about the “weathering the storm” in the midst of the coronavirus. They said startups can expect longer timelines for acquiring investment money, investors focusing on their existing portfolios and lots of unanswered questions.

Ben Capell, a partner in Peterson Ventures, said he is telling companies to “prepare for the worst and hope for the best.”

“As we’ve talked to companies, I think we’ve tried to recognize the reality,” Capell said during the webinar, hosted by Kiln. “We don’t really know what’s going to happen in the coming months. … We know that whatever plan we had in place going into the year is not the plan that we probably should have going forward. It’s probably going to be different. The question is, how different?”

Sid Krommenhook, general partner at Album VC, said a funding round for a company that normally would take 12-18 months likely will take 24 months now, and startups need to study their cost structures to determine if they can stay afloat until the end of 2021.

Many startups will face a grim choice, including whether to have layoffs, according to Gavin Christensen, founder of Kickstart Seed Fund.

“If you lose a few people, that’s sucks and it’s horrible and it’s a tricky environment,” he said. “But if a company stalls out and fails, everybody loses their jobs, right? So you really have to think about what’s best for the most amount of people. And often the decisive actions are those that are hard in the short term but they’re good in the long term.”

Still, the investors noted that the current environment has several positives. Among them are that truly innovative companies shine when there are constraints, there is a lot of capital available, and while the focus may be on portfolio companies, investors will still be looking for great companies with great ideas.

Christensen said the environment is much better than in, say, 2008. “The good news about Utah and this ecosystem is it’s so much better than it was,” he said. “We’re deploying capital. Things have changed, and we’re not going back to 2008, right? There’s capital, there’s critical mass, there’s so many good things. Back then, getting a $750,000 round done was like a heroic effort.”

He cautioned to take the virus impacts seriously. “The fundamentals are there to really rally back, but this is sort of unprecedented. We’ve never seen something like this in the world in the modern era,” he said.

In that environment, a “back to basics” approach should benefit startups. Utah entrepreneurship hallmarks — scrappiness, efficiency and a strong product/market fit — will help companies emerge from the pack. Christensen said that “a lot of the Utah approach is going to shine in this environment.”

Krommenhook said successful companies likely will have founders “with skin in the game,” will demonstrate grit and will have teams “that can slog through the mud when it’s difficult.”

“On the opportunity side,” Christensen said, “it’s important to recognize that the companies that figure this out and that are able to navigate this successfully are likely going to be the new titans of our ecosystem.”

Krommenhook said that the very willingness to start a company now “shows something.”

“If you’re starting a company right now and you’re hunkering down, that signals something, and we applaud it,” he said. “We’re going to invest in some of it and I think, on average, I think it’s safe to say that the toughness — if it’s the right word, I don’t know if it is — of founders on average that build companies during these times skew a little higher.”

Christensen suggested that startups build a strategy to survive the current situation and then set themselves up to thrive. “There will be some big winners,” he said. “There’s going to be tailwinds because the economy is fundamentally pretty amazing underneath this crazy haze of coronavirus.”

Capell urged startups to work with, rather than against, their competitors in order to address challenges for the benefit of everyone.