Vivint merger nets $700 million and a probable move to public 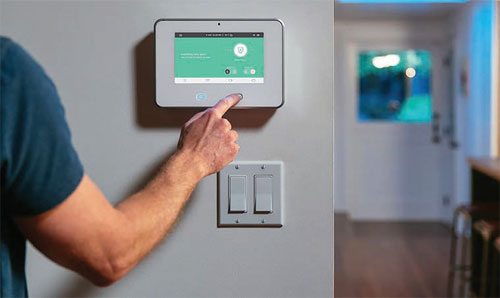 Provo-based security and home-automation giant Vivint Smart Home could be a public company later this year, thanks to a merger with Mosaic Acquisition Corp., a special-purpose company formed in October 2017 for just such an occasion — acquiring an established firm and taking it public. Vivint announced the merger in a press release last week.

Located in New York City, Mosaic is an investment entity created by a subsidiary of the Japanese investment giant SoftBank Group, which will rename its public company Vivint Smart Home following the merger.

Mosaic will enter into the merger as part of a requirement placed on the company by the New York Stock Exchange in order to retain its status as a public company. In October 2018, Mosaic was notified that the company was not in compliance with NYSE’s listing standard that requires NYSE-listed companies to have a minimum of 300 public stockholders on a continuous basis. At the time, Mosaic had 45 days to present a business plan that could bring the company into compliance within 18 months. Mosaic expects to meet NYSE requirements with the Vivint transaction.

Following the merger, Vivint will have an enterprise value of $5.6 billion, according to its release. The merger will generate about $700 million in new capital which the company said it will use to pay down existing debt. Vivint is expected to have revenues of $1.3 billion for fiscal year 2020.

“We have been looking for an opportunity to expand for a little bit now … This felt like a great way to finance and support the company going forward,” said Vivint chief financial officer Mark Davies. “The vast majority of the proceeds from this transaction will go to paying down our debt that will give us more cash flow to invest in the business because we’re not paying interest on that debt. It also gives us an opportunity to leverage some of the experience and the businesses that are owned and managed by SoftBank.”

Vivint is one of the largest home automation companies in the world, with 1.5 million subscribers across 98 percent of the ZIP codes in the U.S. and in Canada. Vivint offers a suite of smart-home products along with installation, nationwide in-home service and 24/7 monitoring and customer care.

Vivint was founded by Brigham Young University grad Todd Pedersen in 1999 as APX Alarm Security Solutions and was then acquired by investment firm Blackstone Group Inc. in 2012 for more than $2 billion. According to technology news website CEPro, Blackstone has been considering taking Vivint public for a couple of years. The website also said that Vivint has been trying new sales strategies over the past few years to improve cash flow, given the enormous cost of acquiring customers — about $1,189 per new subscriber in 2018.

The Provo-based executive and management team of Vivint will remain unchanged, the company said. All existing Vivint directors will serve on the board of directors of the combined company. Investment funds affiliated with Blackstone and other existing investors of Vivint, including management, are retaining their full existing investment, amounting to about 78 percent of the company. Blackstone has also agreed to invest an additional $100 million in Vivint through an investment in the common stock of Mosaic immediately prior to the closing of the merger, which is expected in the fourth quarter of 2019 or first quarter of 2020.

David Maura, chairman and CEO of Mosaic, will serve on the board of directors for the new Vivint Smart Home along with Vivint founder and CEO Todd Pedersen, president Alex Dunn and CFO Mark Davies. Maura is the chairman and CEO of Spectrum Brands Inc., owner of several popular consumer brands like Cutter and IAMS, as well as several small-appliance and residential-electronics companies, including Kwikset, Weiser, Baldwin and Black & Decker.

“Having founded Mosaic in October 2017, I was determined to find not only the right target, but also the right partners,” Maura said. “Todd and Alex have built an incredible business over the past 20 years and I am honored to be a part of the team as we look into the future. “

“We are excited to partner with Mosaic to unlock the next chapter of the Vivint growth story,” said Pedersen said. “We remain committed to our mission of redefining the home experience through intelligently designed, cloud-enabled solutions delivered to every home by people who care. Just as it was in 1999 when I founded this business, to today where we are a multi-billion-dollar enterprise, our customers remain our focus. As the smart-home market rapidly expands globally, Vivint is in the early stage of a massive opportunity and is ready to create the future of how we live and interact with our homes.”

Peter Wallace, a senior managing director at Blackstone, said, “Vivint has defined the smart home, becoming the industry leader on the back of its innovative products, integrated solutions and superior customer experience. We are proud to have supported the development of the company that has set the pace for the industry and are excited by the opportunity to invest further to support Vivint’s future growth.”

“We look forward to leveraging David Maura’s prior M&A and operational experience leading a consumer-facing company,” said Dunn. “Proceeds from this transaction will fortify our balance sheet, and enable us to continue to drive the innovation, customer focus and service offerings that our customers have come to expect from us. We intend to remain disciplined in our capital allocation, while driving down customer acquisition costs without sacrificing organic growth.”