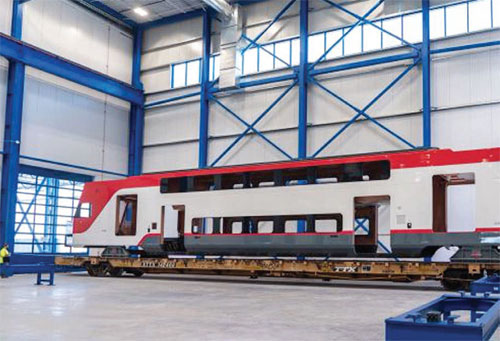 Switzerland-based rail car manufacturer Stadler US has moved its Utah operations from its temporary location in the north end of Salt Lake City to a permanent, state-of-the-art facility near the Salt Lake City International Airport. The company made the move late last month to a location that will likely be in the area to be known as the Utah Inland Port.

Utah was chosen by Stadler in 2015 as a temporary U.S. base while it decided on a permanent location. In 2018, the company announced that it would stay in Utah and began construction on the new plant in Salt Lake City’s Northwest Quadrant. Stadler contributed to the development of the area and is now planning on immediately employing a total of 350 workers to complete a project for California’s Caltrain rail system.

“It feels great to permanently take root in Salt Lake City and celebrate the beginning of a new age in railroading. That’s what this building represents. We are here to stay,” said Martin Ritter, president and CEO of Stadler US Inc.

The new 230,000-square-feet building is located on a 62-acre site and consists of five manufacturing bays measuring 45,000 square feet each. Stadler partnered with CenturyLink and Centracom to install a fiber network to deliver deliver high-speed internet access to the company’s site and future development in the area. Stadler worked with local rail provider Salt Lake Garfield and Western to install a rail spur connecting the new facility to the U.S. national rail network ,allowing materials from around the world shipped to ports such as Long Beach or Houston to be transported directly to its facility.  Stadler is also constructing a 2/3-mile train test track complete with overhead electrical systems. The test track will be used to commission and test trains as they come off the production line and are moved into dynamic testing. Once testing is complete and the train is accepted, it will be shipped to customers across the U.S.

The new Stadler building was designed by Sanders Architects with special attention to employees and offers amenities such as radiant floor heating, skylights and generous natural lighting as well as electric vehicle charging stations, Stadler said. The building, built by OneWest Construction, allows for maximum energy efficiency as well as work efficiency, having been modeled after Stadler facilities worldwide.

The new plant is currently busy producing electric train components for California’s Caltrain system for an order of 16 six-car, KISS model, double-decker, multiple-unit trains. Caltrain recently signed an option to expand the order to 19 seven-car train sets which will be assembled in Salt Lake City, the company said.

Stadler has scheduled a ribbon-cutting and grand opening ceremony on May 9 and is inviting the general public to tour the facility.