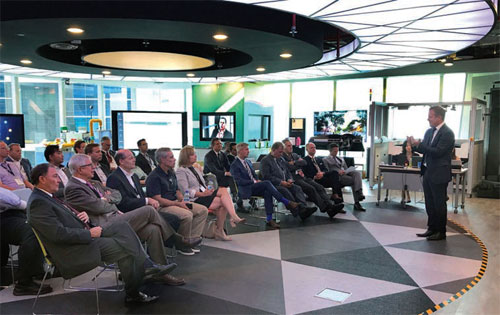 Representatives of 20 Utah companies joined Gov. Gary Herbert and others on a recent trade mission to Singapore and Vietnam.

Ten of the private companies participated in Gold Key business matchmaking services facilitated by the U.S. Commercial Service and designed to connect Utah companies with potential clients and partners in both nations.

“Trade missions facilitate opportunities for companies to build connections with potential clients and partners,” said Derek B. Miller, president and chief executive officer of World Trade Center Utah. “Singapore and Vietnam are prime markets for doing business in Asia due to their growing middle classes and ease of doing business. There is a lot of overlap in targeted industries in Utah and these countries, so the opportunities for collaboration are plentiful.”

Many Utah companies already do business in Singapore and Vietnam. During the trade mission, the Utah delegation had the opportunity to visit with Rio Tinto representatives in Singapore and stop by Nu Skin Enterprises’ Vietnam office. The delegation learned about how Rio Tinto is partnering with Accenture Innovation Hub in Singapore to create technology-driven solutions to improve efficiency and safety in their operations around the world. Singapore is a major distribution and logistics hub, and a gateway to the Asian market. It is ranked second in the world for ease of doing business by World Bank.

The legal team from Provo-based Nu Skin spoke to the Utah delegation about what it means to do business in Vietnam and what it might take to establish a business there from a legal and tax perspective. Vietnam is an attractive location for Utah companies to do business because of its strong GDP growth, large population, fast-growing middle class and political stability.

An important component of the trade mission was foreign direct investment. During the first day of the trade mission, Utah leaders presented to the American Chamber of Commerce in Singapore and potential investors on why Utah is a great place to invest. Several Singaporean businesses interested in locating their companies in the U.S. attended the event and expressed interest in Utah.

“We’ve had great success establishing strong trade relationships with both Vietnam and Singapore,” said Val Hale, executive director of the Governor’s Office of Economic Development (GOED). “This trade mission was an important step to discuss specific strategies for mutual collaboration in economic and political initiatives between Utah and these two countries.”