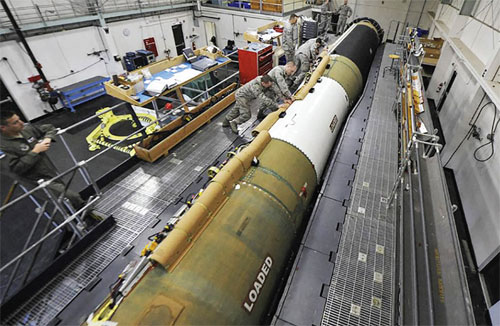 It looks like the next phase in the development of the new Ground Based Strategic Deterrent (GBSD), the replacement for the Air Force’s Minuteman III intercontinental ballistic missile (ICBM) system, will involve Utah — at least to some degree. Boeing and Northrop Grumman both won contracts recently from the Department of Defense for the next step in the development of the missile system called the Technology Maturation and Risk Reduction (TMRR) phase.

The contracts are part of a planned overhaul of the U.S. nuclear arsenal that will eventually cost $62.3 billion, according to an Air Force estimate last year. The Air Force said it gave Boeing a $349 million contract and Northrop Grumman a $329 million award to advance the technology needed to replace Minuteman missiles that date to the 1970s.

Boeing announced that at least part of the work, which the Air Force wants finished by August 2020, will be done at its Ogden facility. Other work will be done by Boeing at its facilities in Huntsville, Alabama, and Heath, Ohio, the company said in a release. Although Northrop Grumman has several locations in Utah, it has not yet indicated where the GBSD work will be done.

In 2020, the Engineering and Manufacturing Development phase of the program will be awarded to one company. The GBSD is the land-based element of America’s nuclear triad. Missiles launched from submarines and aircraft are the other elements of the triad. Boeing and Northrop Grumman will be the competitors for that much larger contract.

Last October, aerospace industry giant Lockheed Martin announced that it had established its own GBSD program at Hill Air Force Base to compete for the TMRR contract. The company was left out of the project in the recent contract announcement, effectively ending its GBSB involvement in Utah.  A Lockheed spokeswoman said the company was disappointed and looked forward to being briefed about the decision by the Air Force.

“Since the first Minuteman launch in 1961, the U.S. Air Force has relied on our technologies for a safe, secure and reliable ICBM force,” said Frank McCall, Boeing director of Strategic Deterrence Systems and GBSD program manager. “As the Air Force prepares to replace the Minuteman III, we will once again answer the call by drawing on the best of Boeing to deliver the capability, flexibility and affordability the mission requires.”

Chicago-based Boeing has built long-range missiles for the Defense Department since the Minuteman I in the 1960s.