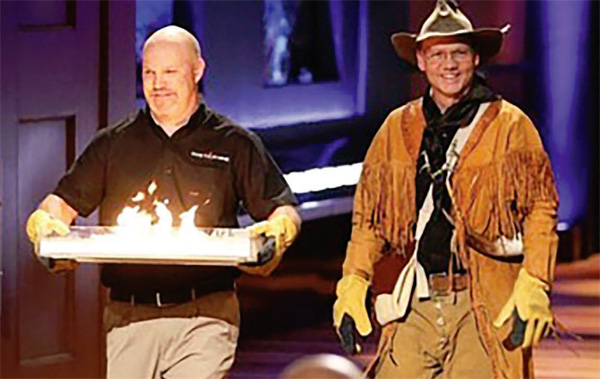 Fire has helped countless people since the dawn of time. Caveman banged rocks together, Native Americans rubbed sticks together. All were searching for an easier, faster and more efficient way to start a fire. Now InstaFire has the art of starting a fire mastered.

The founders of InstaFire have over 40 years of combined business and outdoor experience and are the leaders in fire-starting technology. CEO Konel Banner, along with Frank Weston, co-developed the patented technology that exists with InstaFire. Banner is an outdoor enthusiast and has over 30 years of Scouting experience. He is also a Dutch oven culinary expert.

Weston is president of InstaFire and spent countless hours co-developing the patented technology. He is an avid sportsman, hunter, fisherman and outdoorsman and served seven years on the Meadowville volunteer fire department. This experience with fire and the outdoors has helped him develop a keen understanding of both the danger and need for fire.

In the fall of 2007, during a mountain man rendezvous in Ogden, Banner was intrigued by an elderly man lighting a rock on fire. How was this possible? Could a rock actually burn? How was this rock so light that it actually floats? How could it burn right on the snow or ice and in the rain? The discovery of this unique rock and its properties was the beginning of something fun. He saw an opportunity to develop a safe way to store emergency fuel and a fire starter.

Banner met Weston in 2008 through a mutual acquaintance. A friendship soon developed and a new company formed. For the next nine months, into each day's early morning hours, they worked in an abandoned, owl-infested warehouse on perfecting the formula that now exists with InstaFire. They formulated it to be safe, easy enough for anyone to use and reliable.

InstaFire is a Small Business Development Center client. The SBDC helped in the research for the "Shark Tank" airing, recommendations for attorney and accounting needs, product development and business planning.