There are a host of incentives that make renewable energy (solar, wind and others) a must-have for today’s businesses. Tax credit subsidies from local, state and federal governments; greater independence from utility companies; and pressures from customers and employees alike to reduce their carbon footprint are just a few of the reasons many companies are embracing renewable energy.

There are currently 2 million renewable energy installations in the United States. And that number is projected to double by 2023. According to the city of Salt Lake, many of its communities will be powered by net-100 percent renewable energy by 2030 and other cities are expected to follow.

A critical factor that will drive renewable energy adoption in the years ahead is the use of energy storage systems. To understand how these two technologies support and enhance each other, let’s take a closer look at the realities of renewable energy.

For all its advantages and goodwill, renewable energy faces two major drawbacks that make companies think twice about adopting it. The first is the significant upfront capital expense of equipping a building with renewable energy. It often requires years of energy savings just to recover the original purchase and installation expenses.

The second is intermittency. The sun doesn’t always shine, the wind doesn’t always blow and climate conditions constantly change. Renewables are often referred to as “non-dispatchable” resources because they can’t be turned on or off to meet fluctuating energy needs. So even the most efficient renewable energy system doesn’t always provide enough power to sustain business operations. This requires companies with renewable energy systems to purchase electricity from the grid when their demand exceeds their production capacity.

Adding energy storage to a renewable energy system multiplies the amount of money companies can save and increases their return on investment (ROI) by reducing the time it takes to recover the purchase and installation costs of solar arrays and storage systems. Energy storage enables companies to save up renewable energy when there is a surplus and use it in times of peak demand instead of drawing it from the grid when it is the most expensive. The electrical rates utilities charge greatly impact savings and ROI. The higher the electrical rates, the greater the savings and the quicker the ROI is realized.

How Does It Work? 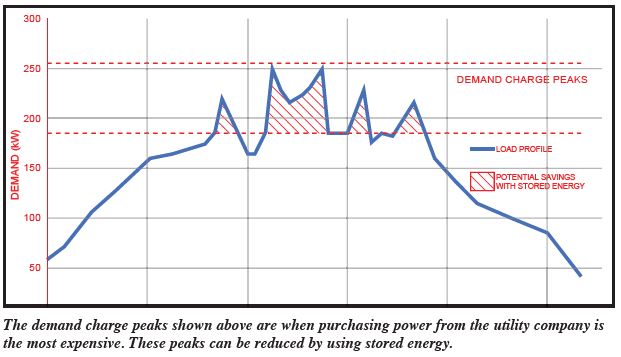 A renewable energy storage system brings lithium-ion batteries on-site and connects them to the solar array to store the surplus power generated during non-peak hours and on weekends. Once this energy is captured in the storage system, it can be used or dispatched to power operations during peak consumption times. It reduces the amount of power drawn from the grid to yield significant cost savings by reducing demand charges.

What Are Demand Charges?

Utility companies encourage their customers to consume electricity in constant, level and steady increments. This helps the utilities forecast demand and plan their production so they can build sufficient infrastructure (transformers and substations) to enable them to provide a constant supply of electricity and meet sudden peaks in demand.

Unfortunately, businesses don’t consume electricity at steady, level rates. Businesses usually consume power in steep peaks during brief intervals when their usage sharply spikes above the average use of their power during the rest of the day. Utilities impose demand charges so they can meet capacity requirements during peak usage times. Keeping power consumption level and steady reduces demand charges.

Energy storage systems can save utility customers money by helping them flatten the peaks of their power consumption and reduce the demand charges they pay. A power storage system gives businesses the flexibility to store the excess energy they generate when demand is low and their systems produce surplus power. They can then use this stored energy during times of peak consumption instead of drawing energy from the grid. Using stored electricity to reduce the amount of power they draw from the grid at peak times reduces demand charges and cuts utility costs.

An added benefit of having an energy storage system charged with electricity provided by renewable energy is that it acts as a backup source of power to prevent interruption in operations if the grid goes down, which happens on an average of four hours per year according to the U.S. Energy Information Administration.

What You Need to Know About Installation

The batteries that power energy storage systems are in the early stages of development so their capacity and efficiency will certainly improve in the coming years, making them even more affordable and widely used than they are today.

The best energy storage solution for you depends on your needs and business objectives. Energy storage systems can be complex mechanisms for gathering and dispatching power; they can also serve multiple beneficial purposes beyond just demand offsetting. So, don’t try to make these decisions on your own. Choosing an established electrical contractor with experience in renewable energy, a history of company stability and a partner mentality is the first step. A good contractor will work together with you and your team to conduct a needs audit and to determine which system(s) works best for you.

These systems require maintenance and monitoring to ensure they evolve and grow with the needs of your business. The right partner can customize an energy storage system that meets your company’s needs while reducing your utility costs and building a better future together.

In the coming years, businesses that are at the forefront of adopting renewable energy and power storage systems can capitalize on these technologies to save money and be part of a larger global cause.