The American Arbitration Association is reporting success rates as high as 85 percent when mediation is tried before resorting to arbitration, litigation or some other dispute resolution procedure 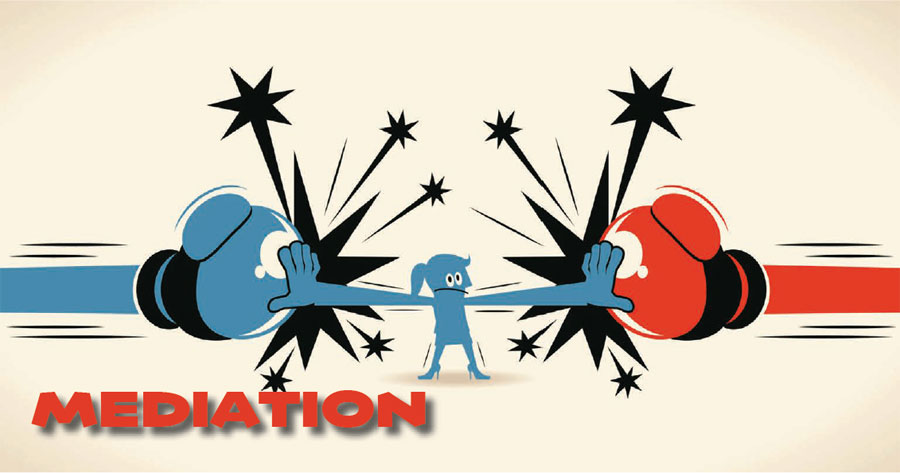 In the construction business, the American Institute of Architects (AIA) is a widely recognized source for standard legal forms and agreements that are used throughout the building and mining industries. AIA’s form No. A-201 is titled “General Terms of the Construction Project” and provides a requirement for the parties to the agreement to mediate any disputes before resorting to arbitration or litigation.

The contract requirement, in part, states,

“If a dispute arises out of or relates to this contract, or the breach thereof, and if the dispute cannot be settled through negotiation, the parties agree first to try in good faith to settle the dispute by mediation administered by the American Arbitration Association under its Construction Industry Mediation Rules before resorting to arbitration, litigation or some other dispute resolution procedure.”

The mediation of a construction dispute has traditionally been voluntary. The A-201 mediation requirement, similar contract provisions and required court annexed alternate dispute resolution programs have brought a new element to the dispute resolution game — mandatory mediation. Whether mandatory mediation will serve the needs of the construction industry or become just another fossil in the graveyard of “good attempts” is unknown. For now, mediation is going to be used with increased frequency by parties involved with a construction dispute. Here are some of the questions being asked by the contractors involved with those disputes:

Mediation is a procedure where two or more parties attempt to resolve their dispute with a neutral party (mediator) who presides over a meeting. The mediator remains neutral throughout the meeting. Mediation is not a judicial settlement conference where a judge attempts to pressure the parties to settle. The process is confidential and no resolution can be reached without the consent of the parties. If an agreement is reached, the agreement will be binding and can be enforced by the courts.

How Successful is Mediation?

There is no authoritative study on the success rate of construction mediation. The American Arbitration Association reports an 85 percent success rate. This percentage is consistent with the success rate reported by other institutional and individual alternate dispute resolution providers.

What are the Elements of a Successful Mediation?

The success of a particular mediation is mainly controlled by the parties. Some of the critical components of a successful mediation involve:

1. The background and capabilities of the mediator.

2. Attendance of the right people with the knowledge an authority to settle.

3. The needs and interests of the parties.

4. Whether a trial or arbitration has been scheduled.

5. The commitment of the parties and their attorneys to prepare for and participate in the mediation.

What Happens at Mediation?

The following is a brief outline of the events involving a mediation:

• The attorneys prepare a short brief for the mediator.

• The parties are introduced and sign a confidentiality statement.

• The parties summarize their positions in a joint session.

• The parties go into separate confidential meetings with the mediator to discuss objectives, needs and settlement options.

• The mediator shuttles between the parties in an effort to find common ground.

• If a settlement is reached, a written agreement is created that outlines the general terms of the resolution. The agreement may provide for more detailed documentation to be drafted and signed by the parties.

• If a settlement is not achieved, another session may be scheduled or the mediator may offer some suggestions to consider that may assist the parties in future negotiations or other settlement efforts.

When and Where Do I Mediate?

There is no set formula for assuring a mediation will be successful. Mediation can be effective anytime. Most mediations occur after a claim has been filed and some exchange of information has taken place. The decision as to whether or when to mediate will vary with each case. However, the statistics from the major institutional mediation services indicate that mediation is most successful when the dispute is in its early stages before the parties have expended their resources on combat, which resources could have been used for settlement. It is important to realize that successful mediation involves a good-faith exchange of information between the parties.

The mediation should take place at a neutral site. The location is often arranged by the mediator. For mediations involving out-of-state participants, a value judgment will need to be made concerning the time and expenses that will be incurred. Most mediators are available to travel to a neutral site to conduct the mediation.

What do I Bring to a Mediation?

The following is a brief summary of those who would be expected to attend the mediation:

• Client: The person with authority to settle and others with knowledge of the facts.

• Experts: Avoid having experts involved. They are hired to support your position and often complicate the process where settlement options are being discussed. Experts, however, may be helpful to describe technical information.

• Documents: Less is better. Summaries, graphs and charts are useful.

• Other individuals: Associates, secretaries or assistants are discouraged. If there is a need, make advanced arrangements so all parties approve and understand their respective roles.

• Other information requested by the mediator.

Who Makes the First Move?

This question assumes there is some advantage for one party to move the process forward. This one is a non-issue. Many items need to be discussed before offers begin to be put out on the table. A good mediator will take the time and make the effort to understand the position and interests of each party. The mediator will know when to start the process of making offers. Usually the mediator will seek a consensus on the easy issues and work toward an agreement on more difficult matters thereafter.

It is common to schedule mediations for either a half or one full day. More time should be scheduled for mediations that require extensive travel, the presence of many parties or involve complex fact or legal issues. It is best to build in a margin of “float” time for the mediation session.

Mediation provides an opportunity for people to have their input into how the process is designed and conducted. The parties are given an opportunity to confidentially express their interests and values without compromising their positions while in the presence of other parties. It provides the parties a sense of involvement and control over the mediation process and the terms of a settlement.

Kent Scott is a shareholder in the construction law firm of Babcock Scott & Babcock specializing in mediation and arbitration.