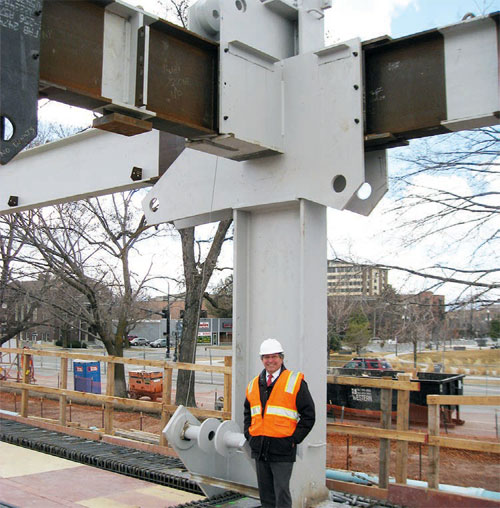 The Salt Lake City Public Safety Building (PSB), home to the city’s police, fire and emergency management departments, serves as the nerve-center during citywide emergencies. On March 18, it passed a real-world test of its resilient systems during the 5.7 magnitude earthquake in the Salt Lake Valley. The PSB is designed to withstand the largest credible earthquake, a major 7.5 seismic event, and remain fully operational. During the latest temblor, all systems performed exactly as they were designed to do.

Designed by GSBS Architects and built by Okland Construction, the Public Safety Building, which opened in July 2013, is also home of SLC911 Dispatch, Salt Lake City’s Emergency Operations Center and houses the city’s primary data center. Following a major disaster, it’s critical that this facility remain operational to coordinate the city’s multi-agency disaster response. Press conferences the day of the earthquake were broadcast from the building’s briefing room.

According to GSBS Principal Valerie Nagasawa, there’s a big difference between a structure that’s designed to preserve life in a major earthquake — which is what modern building codes aim for — and a structure that’s designed to remain fully operational. It’s a much higher bar and it took a combination of design strategies unique to the PSB achieve it. Among them, dozens of huge dampers that act as “shock absorbers.”

“One of the most visible features of the building’s structural design is the large steel dampers, filled with silicone, that absorb lateral movement and keep the structural frame intact,” explained Nagasawa. “There are 56 of them around the building. We heard that staff inside the building saw the dampers doing their job on the day of the earthquake. That’s pretty exciting.”

This was confirmed by Assistant Police Chief Tim Doubt, who was on the third floor during the largest aftershock and said the dampers made the building “feel like a cruise ship rolling in heavy seas.”

Keeping a building like the PSB up and running following a disaster is more than just a structural challenge, however. There are myriad non-structural elements that have to be designed for resiliency as well.

“It doesn’t matter if the building is still structurally sound if there’s no power, or if it’s freezing inside afterward because the HVAC fans did not survive the quake,” said GSBS President Kevin Miller. “We had to think about every element of the building and set performance expectations for each and every one.”

To help with that, the team included engineers from the San Francisco Bay Area with expertise in both structural and non-structural seismic components to carefully design each detail. One of those experts is Maryann Phipps, president of Estructure, based in Oakland, California. Phipps believes we can learn a lot from this moderate seismic event about the way the Public Safety Building will perform when it faces the maximum credible event for which it was designed.

Phipps said, “All the attention to protecting architectural, mechanical, electrical, plumbing and IT systems paid off — the building performed exactly as intended and no repairs were required.  This gives us even greater confidence that it will also achieve the goal of serving the public immediately following a major earthquake.”

When the officials of Salt Lake City set out to construct a new Public Safety Building, disaster response was only one of its intended uses — and the use that would likely happen the least often. It was also meant to become the public face of both the Salt Lake Police Department and the Fire Department and was designed as the first net-zero building of its kind in the country. It was also to anchor Salt Lake City’s municipal campus and needed to be a fitting architectural statement to complement its neighbors to the west, the Public Library and the City and County Building.

“PSB is a very unique building in so many ways, but perhaps the most remarkable to me is that every element of its design supports at least one — and usually most — of the design directives that the city tasked us with meeting,” said Miller. “There is nothing frivolous about the design. The seismic solution is just one piece of that ecosystem, but it is a critical piece because earthquakes are the most likely community-level disruptors.”

Since its opening in 2013, the PSB has fulfilled each of the city’s objectives, day-in and day-out, with the exception of becoming the command center following a major earthquake. Thankfully, that scenario didn’t fully play out on March 18, but the events of that day gave the city a taste of what the PSB can do, and they came away pleased.

“We feel it performed great,” said Doubt. “We lost power for less than two seconds as the generators kicked on and we didn’t skip a beat. The only thing that was even different from normal operations was when the seismic switches on the elevators tripped,” exactly as they were designed to do.

“I do feel this is instructive. We now have firsthand experience that the building will protect us and continue functioning. Those of us who worked on the project knew this would be the case, but now the employees feel safe in our building during an earthquake.”

First responders, city leaders and citizens can all agree that it would be best if the city and the PSB never had to bear the brunt of a 7.5-magnitude earthquake. But for now, people can have confidence knowing that should the unthinkable happen, the Public Safety Building will be up to the challenge.

Eric White is director of business dev-elopment for GSBS Architects. He holds a B.A. in journalism from BYU and has spent his career in marketing communications as a copywriter, creative director and brand strategist.