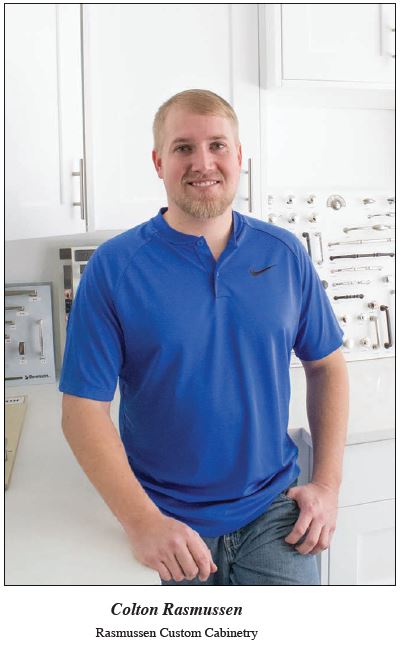 Cabinetry business built on the backs of a solid team

Colton Rasmussen is a charismatic, ambitious young man. He has built a successful cabinetry business from the ground up, starting from a creative idea to a full production cabinetry plant. His business, Rasmussen Custom Cabinetry, has been named the 2019 SBA Utah Rural Business of the Year.

Rasmussen’s father owns a cabinet shop in Utah that Rasmussen now competes with. Although he learned a thing or two about cabinets from working in his dad’s shop, he used his ingenuity to follow his own path.  In northern Utah there is a company, Lewis Cabinets, that builds cabinet boxes and fronts for business-to-business sales. In 2012 Rasmussen realized that he didn’t have the money to start his own manufacturing company, so he made a deal with Lewis Cabinets.  He would hit the street, sell and install cabinets if Lewis would supply them for him. Lewis agreed and Rasmussen Custom Cabinetry was born.

The folks at Lewis Cabinets were blown away by the ambition and hard work Rasmussen put into his job. He was a great client and they really enjoyed working with him. It didn’t take long for Rasmussen to grow his business to a point where he could start manufacturing cabinets on his own.

This is about when the Small Business Development Center began working with Rasmussen. The Lewis brothers suggested the SBDC contact Rasmussen and see if wIT could assist him.  Rasmussen was ready to ramp up manufacturing and needed a building. The SBDC was able to guide him to the Fast Track Grant available to rural counties in Utah.  Rasmussen was stationed in a non-rural county, but when he saw the opportunities in setting up shop in a rural county, he went after it.  He found a building in the small city of Corrine in Box Elder County and used the Fast Track Grant to buy it.  The money he saved was used to hire an employee and buy a piece of machinery.

In 2018 Rasmussen used the Fast Track Grant again to buy another piece of machinery, giving him a competitive edge over other cabinet shops. In a short six years, Rasmussen has built his business to $4 million in sales with 33 employees. He is continuing to innovate and create.

“I know I could stop and just go with the flow now. I have built a pretty good business, but I believe we can do more so we are always working on what we can do to build this to a nationwide company,” Rasmussen said.

One of Rasmussen’s success attributes is his humility. He realizes he needs bright, talented people around him that are strong in his weak places, so he has built a tremendous team.

“I take the "seagull" approach to management. I fly out and do what I am good at and then fly in and poop all over everyone,” he joked.  Kidding aside, you can see through his success in such a short period of time, he has built a solid and loyal team of like-minded people.

Rasmussen is also a devoted husband and father. Although he works hard and puts in a lot of hours, he makes sure he has a lot of time to spend with his family.

Reprinted with permission from the Utah Small Business Development Center. Appeared in the 2018 Issue of the Utah SBDC Report “Success.”