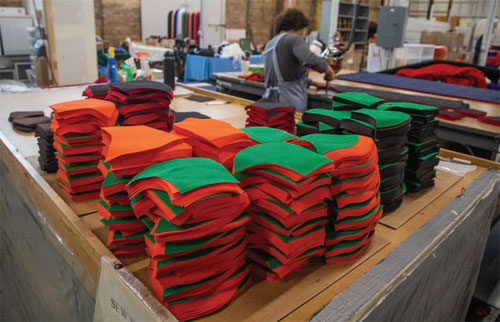 Many families in Utah have a Coleman letter jacket, school sweater or cheer outfit in their closets. Since 1947, Coleman Knitting Mills has been making letter sweaters and jackets and cheer wear and gaining local and national recognition along the way.

Through the years, Abrahm Dalebout said he has worked with the SBA to help finance his business ventures. “We actually worked with the SBA when we purchased Intermountain T-shirt Co. back in 2007. We still currently own that company. At Intermountain T-shirt, we went from three employees to eight employees and $350,000 in sales to $1.9 million in over 12 years,” Dalebout said.

They purchased Coleman Knitting in 2018. “I love the SBA. We have had such great success working with them,” Dalebout said.

The Coleman response began back in March as school sales were winding down. Demand was very high for surgical-quality masks and clothing since the pandemic started, as PPE helps protect patients, medical and support staff against the virus. After a call from Abrahm’s sister-in-law, who oversees several nursing homes in the Northwest, the Dalebouts hit on the idea of switching production.

“She explained that they were short on masks and gowns and asked if we had the capability to be able to produce something like that. We immediately created and re-worked the mask to what has become the current mask we are using. We also took our sweater pattern we have used for over 70 years and made that into the gown pattern. Both the mask and the gown have been so widely loved and accepted by hospitals, clinics and other forms of medical that we have orders that will extend long beyond the COVID crisis,” Dalebout said.

Dalebout counts agility and supplies inventory as the two most significant factors allowing them to respond during the current situation. “We moved quickly to production and we had the materials in-house that allowed us to start immediately. Just to give you an idea what happened, we made the pattern on Thursday. Our crew came to work full-time Friday and they sewed all day and have not stopped since that day,” he said.

His advice to other entrepreneurs during this crisis? “Get creative with what you have. Whatever your line of business, think of an alternate way to produce something, or how to use your current product and still get the consumer,” he said.

He points to the food industry as an example of innovation in adapting their processes. “I think the food industry has done an amazing job of transforming into curbside food. Also, there is an art supply store making kits for kids to do at home while they are out of school,” he said.

Dalebout said their biggest challenge now has been keeping up with the demand. “There are so many areas that need the PPE product. Even businesses are now needing it to help keep their employees coming to work.” he said.

Fortunately, Coleman Knitting has been able to keep its employees working while contributing to the fight oagainst the virus. They have hired 135 contract sewers, 15 new employees and created a night shift to help with the demand.

“The second-biggest hurdle was getting the products Center for Disease Control-compliant. We are now working with the FDA to get them approved,” he said.

As a result of this new market opening to them, Coleman will be creating a new division offering PPE. “We have had such a great response and have so many new hires that need jobs that we will continue to offer these products and more that we create,” Dalebout said.

Story furnished by the Utah District Office of the Small Business Administration.